February 02, 2023
9 New Articles
Home NASL & USL FC Edmonton Eddies dominate on the stat sheet, but not on the scoreboard 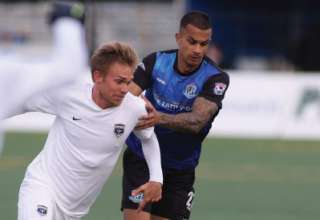 FC Edmonton coach Colin Miller’s emotions about Saturday night’s home-opener loss can be summed up in one word.

“I’m in disbelief that we lost that game,” he said after the Eddies’ 1-0 loss to Jacksonville. “We battered Jacksonville for 80 minutes. We’ll play worse and win.”

The Eddies held the advantage in shots, possession, territorial advantage. Pick a stat other than the scoreline, and the bar would have favoured the Eddies.

But FCE couldn’t recover from what Miller called an “atrocious” goal in the eighth minute. According to Jacksonville coach Mark Lowry, the Armada worked all week long on set pieces. The players and coaches discussed that, on the first corner of the game, they’d take it short.

And that’s what they did.

The ball went to Zach Steinberger, who, from a bad angle, decided to have a shot on goal. There were a couple of blue FC Edmonton shirts between Steinberger and the goal; what looked to be a harmless shot went in between the pair of defenders. But keeper Chris Konopka, who had the area covered, somehow allowed the ball to squeeze in between him and the near post.

“Santa Claus is coming to town,” Miller said of the goal.

After that, the Eddies took control, but couldn’t convert. Dustin Corea lashed a shot on goal that forced Armada keeper Caleb Patterson-Sewell into a good save. And, then, with time ticking down in the first half, Dean Shiels hit a low cross for Tomi Ameobi in the Armada penalty area. Ameobi went into a slide to try and poke the ball in the net, but he hit the turf just a half-second too early, and the ball went off his instep rather than off the sole of his boot. Instead of going into the net, the ball just kinda stuck to Amoebas leg and Patterson-Sewell was able to claim.

The second half saw the Eddies create more chances. Corea had another go at goal. Ameobi had a couple of chances go wide.

On the counter, late in the second half, Armada sub Derek Gebhard poked an effort off the post.

Then, in the 85th, the Eddies had their best chance of the game. Adam Straith, playing at centre back in place of the absent Pape Diakite, who Miller said was “unwell,” got his head into a Ben Fisk corner, and crashed his effort off the crossbar. Straith’s family was in attendance, and it could have been a storybook game for the Canadian national-teamer.

It would go down as the Eddies’ final good chance of the game.

Straith said that, despite the strong spells of possession and the scoring chances, that the goal conceded would eat away at the team.

“We shut off. We had a few players go to sleep. That can’t happen in the first few minutes of the game.”