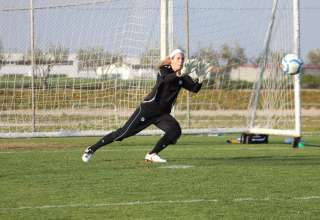 The sky was orange, giving way to dusk. The temperature hovered near the freezing mark. At one end of the field, if a ball was kicked over the goal, it went into a meadow that separates the Victoria Soccer Club’s outdoor-field complex from a Leon’s furniture warehouse.

On one side, FC Edmonton’s reserves in blue. On the other, the Canadian national women’s team in red.

For Stephanie Labbe, it was a homecoming. She’s the only former member of the 2004 Edmonton Aviators to be on the current national team. Back when the cash-strapped Aviators played their one and only tumultuous W-League season, they’d often train on fields like this, in chilly conditions. They’d use school fields and community parks.

“For me, this was definitely a flashback,” said Labbe. “From the Aviators to the Alberta team, I was going back to my roots. Definitely, in 2002, when the (FIFA) Under-19 Championship was here, that was my first exposure to the national team. I was in the stadium watching them. Now, to be back here, with the national team, it feels like I have come full circle.”

The session’s highlight was a scrimmage between FC Edmonton’s reserves, with players like Bruno Zebie, who was just at Canada’s U-18 camp in Guatemala, and six-foot-three defender Marko Aleksic going against the women. National-team coach John Herdman regularly stopped the scrimmage to give his team instruction, telling the players where to look for openings and how to take advantage of the wide areas.

While Labbe was in goal for the Canadian side, both Karina LeBlanc and Erin McLeod, the top two keepers on Herdman’s depth chart, came in and out of the FCE goal.

Even though all three are competing for playing time, Labbe said their relationship is strong.

“It’s great, we push each other so much, we have a lot of respect for each other on and off the field. Playing with the other two has helped me develop so much.”

And Labbe will soon have to make another decision regarding her development. Even though her roots are in Edmonton, she’s made Sweden her home since 2009. She played for Pitea and, more recently, Orebro.

“Played” is the key word, as her Orebro contract has now come to an end. And she isn’t sure if a return to Sweden is in the cards, or if it’s time to try to move to NWSL. The Canadian Soccer Association funds the salaries of 16 players in the league, and Herdman will soon have to declare the names of those players for the 2014 NWSL campaign.

“Sweden was definitely a great place to play,” said Labbe. “I was able to develop a lot from playing there. But I have to look at what’s best for my career development, and what is in the best interests of the national team. Going back to Sweden is an option, but NWSL is also an option.”

But, that decision will have to wait. For that one Friday evening, it felt like it was 2004 again. Oh, if someone finds a ball in the meadow behind the Leon’s, please return it to the national team.