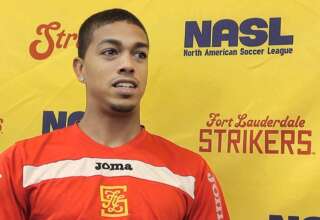 >Now that the MLS expansion draft is done, the Montreal Impact wasted little time going back to the NASL well.

The team announced Friday that it has signed American midfielder Bryan Arguez, who spent the 2011 season with the Fort Lauderdale Strikers.

Even before Jesse Marsch came on as coach, the team vowed that it would mine NASL for players — not just from its own roster, but from around the league — to make the jump with the Impact to MLS. The team confirmed that Arguez was a pick made through the MLS Discovery process.

Now, Impact fans should think back to Labour Day weekend. Why? On that day, the Strikers beat the Impact 1-0, a game that dealt a massive blow to the Montreal’s NASL playoff hopes.

Who were the two standout Strikers that day? Gerson Mayen and Arguez.

That game surely must have left an impression on the Impact brass, as Mayen was acquired in an Expansion Draft-day trade with Chivas USA, which held his MLS rights. Now, Arguez has been inked.

Impact fans should look back through the 2011 calendar for other standout performances in NASL action vs. Montreal. Etienne Barbara? Mozzi Gyorio? Jonathan Fana? Shaun Saiko?