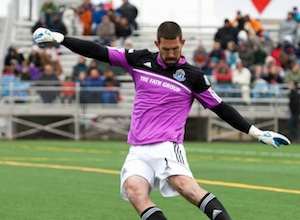 Matt Van Oekel was playing professional soccer in Minnesota before the modern NASL was a thing. His wife and 15-month-old son still live in the Gopher State, though they are set to move to Canada in a couple of months.

So, when Van Oekel puts on the keepers’ gloves on Sunday for his new team, FC Edmonton, it will start what will be an emotional afternoon. For the first time since he signed with the Eddies, he will play against Minnesota United.

“I was there for a very long time,” Van Oekel said after the Eddies wrapped up training on Friday. “I know 90 per cent of their players. It will be an emotional day for me.”

Last year, had the lowest goals-against average in the NASL by the second-last weekend of the season. In the final weekend, Van Oekel surrendered a couple of goals and FCE’s John Smits won the Golden Glove award for the lowest GAA in the league. But, despite posting such good numbers, Van Oekel found himself looking for a team in the off-season.

“It wasn’t my choice; they didn’t have me in their plans,” Van Oekel said of the move from Minnesota. “They wanted to go in a different direction. And it turned out to be a blessing in disguise. I have a coach here (in Edmonton, Colin Miller) who I get along with wonderfully, and a goalkeeping coach (Darren Woloshen) who really pushes me.”

But, as a former Loon, does Van Oekel have any insight into why Minnesota — the preseason favourite of many pundits to be at the top of the league in spring (and fall, too) — is off to such a poor start? The Loons have just two points from their first three matches, and now have to go to Clarke Stadium to face an Eddies team that has not lost a home game since last July.

“I think it’s because the NASL is better than it has ever been,” said Van Oekel. “Right now any team can beat anyone on any given day. There will be no team this year that will be able to go on a run of games and stay at the top of the standings like Minnesota did last year.”