July 07, 2022
9 New Articles
Home Global Game CONCACAF “Even if he’s on a bed, we will take him”: Floro calls in injured de Guzman to provide leadership to CanMNT 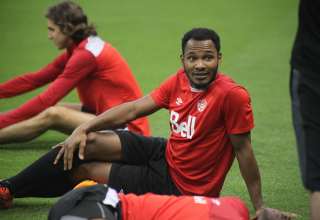 Julian de Guzman’s knee injury won’t allow him to take the field for Canada in its two upcoming do-or-die World Cup qualifiers. But he’s still going along for the ride.

De Guzman, though not available for selection, will join the Canadian national team next week in Florida and then will be with the players for Sept. 2’s match in San Pedro Sula against Honduras. The veteran midfielder was hurt in an Ottawa Fury training session a couple of weeks ago

“Even if he’s on a bed, we will take him,” Canadian national team coach Benito Floro replied to a question that had been submitted to Canada Soccer by The11.ca.

Canada will also host El Salvador Sept. 6 at BC Place.

The veteran de Guzman’s presence is important because, as Floro said, it helps the side with “social cohesion.” The veteran is good with young players and can still help the side organize ahead of these two very big matches.

Floro also addressed his decision to leave Toronto FC’s Will Johnson off the roster. This was the biggest surprise when Floro named the team on Thursday.

Floro said that if a player isn’t ready to play for a full 90 minutes, he can’t be selected. And, in Johnson’s case, recovering from a broken leg, Floro was concerned that the player wouldn’t be available to go that long in a match.

He said, to be selected, “a player needs to be in perfect condition to play for the full 90 minutes.”

Floro said that, in fact, Johnson is such an important player for Canada down the road that “it’s important that he have a good recovery.”

Floro also said that Johnson is “good, honest professional. The last injury was a serious injury.”