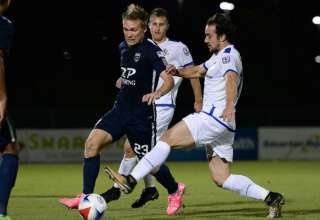 In their previous four meetings this NASL season, the Jacksonville Armada beat FC Edmonton by 1-0 scorelines every time.

So, when Jack Blake’s first-half goal gave the Armada a 1-0 lead at home Wednesday night, many betting people would have thought, “well, that’s it for the night.”

But, finally, in their fifth meeting of the season, it didn’t finish 1-0. The Eddies came back.

Ben McKendry’s deft pass split the Jacksonville defenders and sent FCE teammates Daryl Fordyce and Jake Keegan off on a two-man breakaway. Fordyce squared the ball for Keegan, who had an easy tap-in to the tie game.

And, despite a wild finish that saw both teams spurn golden chances to score the winner, the game ended 1-1.

“I have to say I thought the team did terrific,” said Eddies coach Colin Miller. “To come down here, to play in these conditions, against an Armada team that was up for it, I thought we should have won by two clear goals.”

The Eddies were eliminated from the NASL playoff race Saturday, but they did the New York Cosmos a major favour. The Armada and Cosmos entered Wednesday’s night’s slate of game tied for the fourth and final playoff spot in NASL. The Armada ended up dropping points at home while the Cosmos took care of business against Puerto Rico FC.

Nathan Ingham got the start in goal for the Eddies, making his first appearance since he was injured late in the spring season due to a heavy collision with North Carolina FC’s Lance Laing.

And it was the Eddies who had the first real good chance of the game, as Albert Watson’s header off a corner kick forced Armada keeper Caleb Patterson-Sewell into a leaping, fingertip save.

But it was the Armada who took the lead; Jack Blake got past Eddies fullback Pedro Galvao and found a soft spot at the top of the box ahead of central defender Albert Watson. JC Banks slotted a pass across the top of the box to the wide-open Blake, and the young English midfielder put a ball across Ingham and into the net.

The Eddies started the second half well, with Sainey Nyassi stinging Patterson-Sewell’s hand with a hard shot.

But, in the 63rd, the Eddies got the leveling goal when McKendry sent Fordyce, who had just come on, and Keegan off to the races.

The Eddies had two great chances to win it late, both involving teenage phenom Abraham Dukuly, who made the move from the Academy to the Eddies’ first team earlier in the fall season. First, Dukuly sprinted into the box to take a Nyassi pass for what could have been a tap-in, but the ball was just too heavy for the teen.

And, near the death, Dukuly led a three-on-one break thanks to his own little flicked header that set the Eddies off on the counter. With Patterson-Sewell at his mercy, Dukuly’s shot went just wide.

“I thought he was terrific,” said Miller of Dukuly. “He didn’t give a ball away once after he came in.”

He also praised Fordyce for his work in the second half.

But, has Dukuly done enough in his sub appearances to get a start against first-place Miami FC at Clarke Field Saturday?

“We are playing the best team in the league, so he won’t start,” said Miller. “It’s similar to the situation we had with Hanson (former FCE midfielder Hanson Boakai). We will bring him in when the time is right, when the other team has tired legs.”

But he said Dukuly will be in the squad and will likely have a chance to influence the game. He said the teen’s appearances justify keeping him in uniform.

The Armada also had a couple of chances to win the game; Ingham did well to get down and kick out a shot from Kalen Ryden. And, just past the 90-minute mark, Aaron Pitchkolan found himself onside and alone in the FC Edmonton penalty area, but his first touch was awful and the ball went into touch.’

But Miller was adamant that the Eddies’ deserved better. “It’s been the story of our season, missed opportunities. We have to do better in front of goal. We’ve had games that we should have won that were draws, game we lost that we could have drawn. We will regroup and hopefully be back at it next season.”