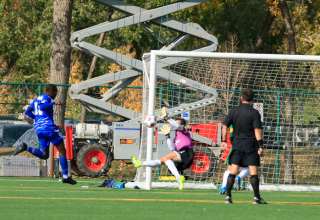 Once again, the woodwork loomed large in an FC Edmonton match.

The Eddies had to settle for a 1-1 draw with the New York Cosmos on a blustery, cool fall Sunday afternoon at Clarke Stadium. But, thanks to two efforts that crashed off the crossbar behind Cosmos keeper Jimmy Maurer, the Eddies can wonder what could have been.

First, a cross from fullback Kareem Moses sailed in the wind and Maurer could only watch, flat-footed, as the ball came back off the bar.

Later in the half, winger Lance Laing, understanding that the wind would cause his shot to swerve, drilled one in from the left wing. It took a wicked hook towards goal, and Maurer leapt to get his fingertips to it and direct it off the bar.

Coach Colin Miller said his team had a “tremendous response” in the second half, even if the Eddies did give up a goal off a corner kick right after halftime.

“We talk about staying tight on set pieces at halftime,” said Miller. “And, lo and behold, we give up a goal on a corner.”

The goal came from Danny Szetela, but was created by Cosmos striker Mads Stokkelien. Off the corner kick, Stokkelien ran across the box, past the near post and towards the corner taker, in order to elude FCE defender Beto Navarro. Despite running towards the corner and away from goal, Stokkelien got enough power and accuracy on the flick to get it all the way to the far post, where Szetela had the easiest finish imaginable.

Stokkelien had given the Eddies enough warnings. In the first half, when New York had the wind at its back, the Norwegian forward had several chances off his head to open the scoring. In the 40th minute, off a corner, on a similar run away from goal, he flicked the ball towards goal. FCE defender Mallan Roberts headed it off the line.

Stokkelien also forced Lance Parker into a difficult save early in the first half, as he got his head to a perfect cross from Jemal Johnson, who had got behind fullback Beto Navarro on the wing. Parker was forced to make the point-blank save with his face, and he had blood coming from his nose after the incident.

Parker also made a good first-half saves on a Danny Mwanga volley from inside the box and then got his fingertips to a 20-yard drive from Szetela.

“In the first half, it was tough for us to get out of our half,” said Parker. “The wind was a factor.”

Johnson caused problems for the Eddies throughout the first half, as Navarro continued his run of games at right back — as FCE’s regular right back, Edson Edward, once against started in the holding midfield position.

But, ironically, the Cosmos didn’t get that opening goal until the visiting team was against the wind.

But the Eddies tied it up thanks to some great teamwork. Chad Burt laid off a ball for Laing on the left wing. He hit a cross into the area, that Horace James nodded across the box for Tomi Ameobi, who ran onto it and smashed it home.

After the equalizer, the majority of chances fell to the Eddies. But the crossbar got in the way.