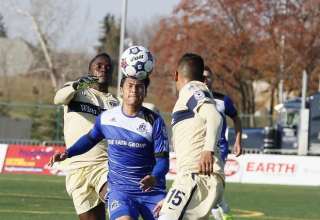 When Canada played El Salvador to a 0-0 draw in a World Cup qualifier last November, Dustin Corea was arguably the best player for the home side. He created chances for the El Salvadorans and had a couple of very good looks at goal.

Corea’s El Salvador side sits three points behind Canada for second place in their CONCACAF group. Each of the four teams in the group — which includes Mexico and Honduras — has four games left to go. The top two sides get spots in the Hex.

Of course, Corea believes El Salvador can get one of those two spots. But he can’t be too vocal about it. After all, he plays his club soccer at FC Edmonton.

“Down here in Edmonton, I can’t really say much about it!” laughed Corea after the Eddies’ training-camp session Wednesday at Commonwealth Fieldhouse. “I might get my head chopped off by the gaffer and some of the guys here. But I want my team to qualify.”

But Corea has a more immediate goal in front of him; to continue to progress and realize his potential as a player who can be an NASL game-changer. Corea signed before the start of the 2015 fall season and became a regular on the right wing for FC Edmonton. He started 14 games, scored once and set up three more. But he got a lot of balls through to the net and showed flashes that he could become one of the dominant wing players in the game. He loved to come in off the right wing and shoot with his left foot.

With the Eddies losing winger Lance Laing, who signed as a free agent with Minnesota United, Corea’s learning curve might have become a little steeper. Laing scored eight times and added seven assists in 20 games played for the Eddies in 2015; in the 10 games he missed, the Eddies won just once.

Can Corea replace some of those goals and assists?

“He has that potential,” said FCE Coach Colin Miller. “If you’re going to be an international player, I expect an international standard. And he’s got a ways to go yet, we know that, he’s still a relatively young player. He’s well thought of within the El Salvador setup. He has to bring consistency now. And I’ve spoken to him, it’s not anything I haven’t said to his face; he now has to have an end product. If he’s going to be that type of player, which is an attacking player, a creative player, he has to have that end product. That’s a good cross that sets up a goal, a final pass that sets up a goal, keep us in possession, or a free kick or a corner-kick delivery. If he can get to that sort of standard, and if I get him working or we get him working on defending properly and fitter, I think there’s a terrific player in there.”

And Corea doesn’t see himself as the next Lance Laing.

“Of course, Lance Laing had great numbers here at the club,” Corea said. “So, to fill his shoes will not be easy. But, for me, it’s more of ‘what I can do.’ I’m not a Lance Laing. He was quick, he can do things with the ball, crossing-wise, shooting-wise that not many guys in this league can do. But I will just play like I’ve been playing my whole life, with the national team, and here. I want to help Edmonton get to the championship. Hopefully the gaffer looks for me on the wings, if it’s the left or the right, hopefully it’s something where I can show the team my worth.”

Corea will look to impress at training camp, which includes a March trip to Scotland. Then, it will be back across the pond and a likely recall to El Salvador, which faces Honduras twice in late March — at the same time Canada will be playing home and away to undefeated, first-place Mexico. The tables can change dramatically after those games.

“It’s going to be a tough game against Honduras,” said Corea. “But they’re not going through a great phase. With the team we had, we were missing six key players with the national team, and what we showed against Canada is that we can give a fight to anybody in the group we have right now. It’s not going to be easy for Canada against Mexico out there, hopefully we get those six points we really need and hopefully expect a different result for the Canada-Mexico games.”

As for Canada, this is what Corea thought.

“I saw them once in the Gold Cup and I saw them again in the qualifiers. It’s a little bit different going down to El Salvador and playing on a surface you’re not accustomed to, playing in front of people that are yelling or throwing things at you. For them, it must have been a little bit tough. What I saw was not the same Canada I saw in the Gold Cup, it was a little bit different. But they have some key players that move the team, that like to keep the ball down on the ground. But, this is qualifiers, anything can happen at any moment.”

Anything can happen? How about Canada stunning Mexico? El Salvador sweeping Honduras? Somehow, Mexico flaming out, with Canada and El Salvador taking the two spots in the Hex? It would help Corea keep his head.