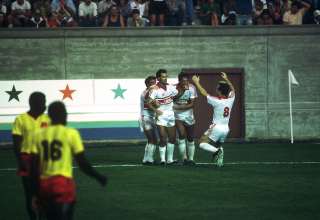 Dale Mitchell, second from left, is mobbed by teammates after scoring a goal at the 1984 Olympics.

The 100th issue of Inside Soccer is now available across Canada and, as has been the case over the last couple of years, I am glad to be a contributor to the magazine. Inside Soccer does a wonderful job of promoting the game across the country, and allowing avenues for soccer stories that don’t appear in other magazines.

As part of the 100th-issue celebration, I was tasked to find current and former members of the Canadian men’s national team, and to simply ask them to talk about their favourite moments in international football. Our article features Dwayne De Rosario, Terry Dunfield, Patrice Bernier, Paul Dolan, Nick De Santis, Bob Lenarduzzi and Greg Sutton.

As well, as part of the process, I got some tidbits from Carl Valentine, Dale Mitchell and Martin Nash. We have presented them here as a preview of the piece that you’ll find in the pages of the 100th issue Inside Soccer.

DALE MITCHELL: 1984 Summer Olympics, Los Angeles
Canada qualified for the Olympic games and Dale Mitchell had one heck of a tournament in Los Angeles. Mitchell scored twice in the group stage, and then gave Canada a 1-0 lead against Brazil in the quarter-finals. Brazil tied the game and took it to penalties (and Mitchell didn’t convert his PK in the shootout), and went onto the silver medal.

“The team successfully qualified for the ’84 Olympic games where we had a couple of good results in the group stage and should have been two-nil up in the second half against Brazil in the quarter-final,” said Mitchell. “For some reason, Gerry Gray’s goal that was totally legitimate was called back for offside. We went on to lose in a penalty shootout against the Brazilians. The confidence within the squad grew from their and of course in ’85 the team successfully qualified for the 1986 World Cup. A great three years for our national team.”

BOB LENARDUZZI and CARL VALENTINE: September 14, 1985 — Canada 2, Honduras 1
On a chilly day in Newfoundland, the Canadian men’s national team did what it had never done before (and hasn’t done since). And that’s qualify for the World Cup. For Bob Lenarduzzi, the euphoria that heated up a blustery day in St. John’s was even more special than heading to Mexico.

“Qualifying in St. John’s for the 1986 World Cup. Obviously, playing in the World Cup was very special, but that afternoon in St. John’s was a culmination of everything we’d worked for. It was cold, but the fans were right there, behind us, in that makeshift stadium. For a few of us, players like Bruce Wilson and myself, it was our last chance (to qualify); that was it for us.”

Valentine recalled how boisterous the home crowd was.

“It was a very small venue, but it felt like we were playing in a large stadium. It was just electric. The level of support was unbelievable.

“I think we scored both of our goals on corner kicks, and that is something we had worked on, we knew we could have an advantage. But there was a real ebb and flow to that game, and you didn’t even dare think about what was at stake until the final whistle went.”

MARTIN NASH: 2000 Gold Cup
Canada didn’t do particularly well in the group stage of the Gold Cup; a coin toss was needed to decide if the team would go through to the quarter-finals or not. But, a stunning golden-goal extra-time winner from Richard Hastings — set up by a wonderful diagonal ball from Martin Nash — gave Canada a win over Mexico in the quarter-finals, and then, with a win over Trinidad and Tobago in the semis and a triumph over Colombia in the final, Canada raised the trophy.

“I remember that, at the time, we didn’t even think we’d get out of the group,” said Nash. “We had to go to the coin toss and we all thought ‘that’s us done right there,’ because Canada never got any luck. But we did get lucky and then we went on to win the tournament.

“Winning the Gold Cup was the highlight. And I set up both goals against Mexico and I put in the corner that led to the winning goal against Colombia.”