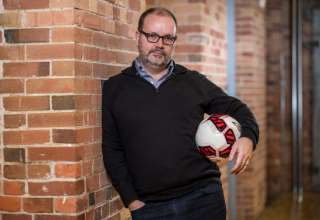 Canadian Premier League President Paul Beirne is in Edmonton for a whirlwind tour Thursday and Friday. He’ll visit Clarke Field for the first time, have what he calls an informal meeting with some members of city council, meet with members of the city’s minor soccer community and, finally, meet with the YEG for CPL supporters’ group Friday evening.

Beirne said he will be visiting all of the prospective CanPL cities to do “due diligence,” that is, look at the stadiums, learn more about each municipality, meet the fans.

“It’s all part of deciding who we want to invite into our league,” he said. “And I want to meet the Rally Rabbit, the YEG for CPL group. I understand that there’s an energy in the supporters’ group that we could replicate across the country. It’s a really cool phenomenon, and there’s something we can all learn from.”

The YEG for CPL is a grassroots initiative launched by fans to raise the awareness of soccer in the Alberta capital; the aim is to bring FC Edmonton to life, this time as a member of the Canadian Premier League. The movement is  symbolized by the Rally Rabbit — a furry totem that dates back to the early NASL days, when FCE played out of Foote Field.

Beirne said the informal meeting with the city will be “to tell them what the Canadian Premier League is about.”

ONE YEAR FROM LAUNCH

“We won’t start with less than six teams,” Beirne said of the league’s scheduled April, 2019 start date. Winnipeg and Hamilton are confirmed, but more announcements are expected to be made soon. Beirne wouldn’t put any exact dates on when we can expect to hear from other teams.

“But over the last four months there has been a ton of momentum,” said Beirne. “I think we’re now up to 20 different parties/communities who have shown interest in us. They’re not all going to come to fruition, but the interest is there. I think we’d want to be at 12 teams by 2022, and 16 teams by 2026.”

If it seems progress is going slow, remember to think about the long game.

In fact, Beirne said there has been interest from American teams. But, don’t think there is a chance that a Canadian league could begin with any U.S. based sides.

“More than one American team has contacted us,” said Beirne.

But, while there have been proposals from south of the border, Beirne said bringing in U.S. clubs is not something that the league could consider, as it’s “opposite of our mission,” which is to promote Canadian players and create a Canadian soccer culture.

The Ottawa Fury is back for its second season in USL. Canada Soccer sanctions the Fury in USL on a year-to-year basis. So, will the team make the jump to the CanPL?

“Ottawa is still a citizen of the USL,” said Beirne. “We keep them informed of everything we are doing. Hopefully, they will see that the opportunity to play Canadian teams is a very positive opportunity.”

Beirne said he’s had meetings with Toronto FC President Bill Manning and Vancouver Whitecaps President Bob Lenarduzzi. He said the reaction from MLS, so far, to the Canadian league is “neutral to positive.”

He said the meetings showed that the MLS clubs presidents “are curious about what we are doing. They want to know how they fit in.”

He thinks there is plenty of opportunity for the two leagues to have a collaborative relationship.

“If we can establish a common ground, we can find a way to work together. And that common ground is a desire to improve the game of soccer for Canadians.”