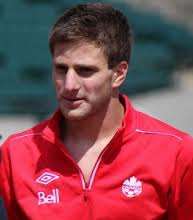 Daniel Haber
The news is good for Canadian forward Daniel Haber, while midfielder Atiba Hutchinson faces a nervous wait. Haber’s Apollon Limassol side was able to advance out of the Europa League playoffs, losing 1-0 on the road to French side, Nice, on Thursday. As Apollon took the first leg at home by a 2-0 count, the Cypriot sidewent through on aggregate. In both the first and second legs, Haber came on as a late sub. The Toronto native and former Cornell University standout spent the second half of the last European campaign with Maccabi Haifa, but made the move to Cyprus in the summer (CLICK HERE). Haber made his debut for the Canadian national side in a May friendly against Costa Rica and will be part of new coach’s Benito Floro’s camp that kicks off Sept. 1 in Spain. Meanwhile, Hutchinson and his Besiktas teammates recorded a 2-0 win over Tromso to overturn a 2-1 first leg deficit. But that doesn’t mean Besiktas is going anywhere, yet. While Besiktas has been allowed to take part in the Europa League’s playoffs, the Istanbul side could be tossed out of Europe on Friday. That’s when the Court of Arbitration for Sport will rule whether or not to overturn UEFA’s decision to ban Besiktas from European competitions over match-fixing claims. If the CAS upholds the UEFA decision, the Besiktas win over Tromso will be tossed out, and Hutchinson and his mates will be banned from Europe. So, for Hutchinson, who played the full 90 against Tromso on Thursday, the joy over the win might last a little less than 24 hours. As Hutchinson just signed with Besiktas, he would be paying for the sins of his club. But, to be fair, he knew going in that Besiktas was dealing with a high-profile match-fixing case. And, if the CAS rulings this week are any indication, things don’t look good for Besiktas. The CAS ruled Wednesday to uphold UEFA’s decision to ban Turkish giants Fenerbahce for its cheating during the same Turkish match-fixing scandal. Even though Fenerbahce was crushed by Arsenal in the Champions League qualifiers, it could have gone on to the Europa League. Instead, its spot will be taken by one of the teams that lost in this round of the playoffs — a team that will be selected via draw.
Load More Related Articles
Load More By Steven Sandor
Load More In Uncategorized
Comments are closed.