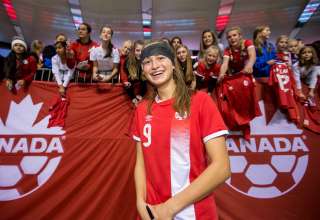 Go into the Canada Soccer database, and you’ll find that the last time the Canadian women’s national team beat the Americans was back in the 2001 Algarve Cup. Charmaine Hooper scored twice and a youngster by the name of Christine Sinclair got a goal.

There have been some draws, that painful semifinal loss in the 2012 Olympics and, more than a few lopsided losses.

Maegan Kelly, a 25-year-old from Kansas City, who, thanks to her family ties, had the necessary paperwork to make her Canada debut, came oh so close to ending that streak Thursday night at BC Place. Kelly got into the American penalty area, then popped the ball over keeper Alyssa Naeher. The ball bounced once and headed for the far corner.

The. Ball. Went. Off. The. Post. (Presented in a way that you can read that out loud in your best Steve Armitage voice).

So, Kansas City Kelly didn’t get what would have been such an ironic winning goal and winless-streak breaker. Still, Canada can take a lot of positives from the 1-1 draw. After giving up a rather silly first-half goal to Alex Morgan, the Canadians were willing to try and stretch the field in the second half and pressed the Americans deep. They created turnovers. When Adriana Leon scrambled home the equalizer to end a mad sequence, it felt like it was coming. The scramble began with a Rebecca Quinn header that forced Naeher into a save, then Quinn taking the rebound and driving it off the bar. Finally, Sinclair got to the ball and launched yet another Canadian attempt towards goal that Leon touched across the line.

“She told us she was gonna score,” Canadian women’s national team coach John Herdman said of Leon, who came in as a first-half substitute. “She saw it, said it, and done it.”

The Americans got the first-half opener after a long diagonal ball down the right side, but the Canadians still had plenty of defenders in the middle of their own penalty area to deal with the situation. The ball bobbled into that spot, but Shelina Zadorsky whiffed on a chance to head the ball away. So, that gave Morgan a chance, and it deflected off Quinn before going in.

Teenager Jordyn Huitema, though she didn’t get a shot on goal after coming in with just seconds left in the 90, gave Canadian fans yet another glimpse on why she could become a folk hero.

American defender Kelley O’Hara came over Huitema’s back, made contact twice as she landed on the Canadian teen, and did a great sell job to somehow get the U.S. a free kick. Huitema got up, got on with things, despite a deep cut over her eye. As she finally went down to get treatment, she was smiling. She chuckled as the trainers bandaged her noggin.

I would cue all the Don Cherry superlatives, but you’re already hearing them in your head.

The Canadians face the Americans in San Jose on Sunday, and odds are the winless streak will continue. But this is one the Canadians will feel they should have won, in front of more than 28,000 fans at BC Place.

The Canadian women’s team is at the upper tier of national teams. The final step is to show the big bully on the block that it can be beaten. Canada is still trying, though the gap does look to be closing.