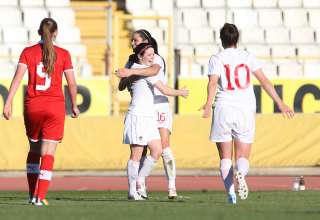 As all-time Canadian leading goal-scorer Christine Sinclair sat out the last game of her FIFA-ordered post-Olympic suspension, her teammates dispatched the Swiss in the opening game of the Cyprus Cup.

Goals from Sophie Schmidt and Diana Matheson gave Canada a 2-0 win over Switzerland on Wednesday. Schmidt, playing her 100th game for Canada, gave her team the lead just two minutes into the match.

“We actually started the game at 1-0, not 0-0,” Switzerland coach Martina Voss-Tecklenburg was quoted on the Swiss Football Association’s website.

“We scored early which gave us the advantage,” Canada women’s team coach John Herdman was quoted in a release issued after the match. “But the Swiss did well during spells of the match so we know we have some things to improve on as well.”

Matheson, the hero of the bronze-medal match victory over the French at the 2012 Olympics, got the insurance goal in the 79th minute with a deft chip.

The Swiss team had the ball in the back of the Canadian net in the second half, but the marker from Olympique Lyon’s Lara Dickenmann was called back for offside.

The game marked the fourth time since 2010 that the Canadian women’s team has faced the Swiss. Canada has won three of those matches and drawn one.