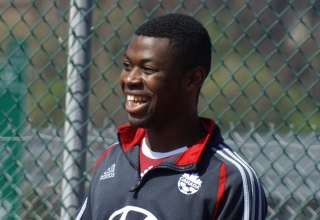 Canadian defender Diaz Kambere, a former Vancouver Whitecap who also had a one-game stint with Toronto FC back in 2008, has joined FC Edmonton as a trialist.

Kambere was most recently a member of the PDL’s Victoria Highlanders. Kambere trained with FC Edmonton in Casa Grande, Ariz. on Tuesday, joining defender Kenny Caceros — who spent last year with Capital City FC of the Canadian Soccer League — and Fabrice Lassonde, who had been with FC Ingolstadt of the Bundesliga 2., as the new Canadian trialists with the team.

In 2008, Kambere was loaned to Toronto FC on an emergency basis. He was brought into TFC on a one-game contract, as the Reds lost nine players to international commitments and needed reinforcements to play in a league match against Chivas USA. Kambere played in the replacements game, which TFC lost by a 3-1 count. (There was another Edmonton connection in that infamous TFC-Chivas game, as a then 39-year-old Rick Titus, a former member of indoor soccer’s Edmonton Drillers and an ex-Edmonton Aviator, was brought in to play on the Reds’ backline.)