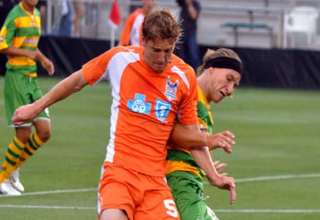 The Vancouver Whitecaps found room for another RailHawk on their roster.

The team announced Tuesday that it signed midfielder Floyd Franks for the 2012 MLS season.

“I’m very pleased to add Floyd to the team,” said Whitecaps head coach Martin Rennie in a release issued by the club. “He’s different than a lot of players that we have. He brings aggressiveness and he can play a number of different positions. He’ll add great depth to the squad.”

Aggressive is one word. Talk to GMs around MLS, and Franks is one of those guys they hate to have their teams face. He’s physical and an agitator. And, depending on the kind of lineup Rennie decides to use when the Whitecaps face FC Edmonton in the upcoming Amway Canadian Championship semifinal, Franks could add spice to what could be an instant rivalry.

Why? Rennie, who coached Carolina last season to the league’s best regular-season record, only to have the club collapse down the stretch and not even make it to the NASL final, has brought more of his former charges to Vancouver than anyone would have dreamed back in the fall. Franks joins striker and NASL MVP Etienne Barbara, midfielder Matt Watson and goalkeeper Brad Knighton as expats from the RailHawks’ 2011 team who now call Vancouver home. And Jun Marques Davidson, who also played for Rennie in Carolina before going back to Japan in 2011, is reunited with Rennie in Vancouver.

If Rennie decides to field a lot of the RailHawks players when the Whitecaps face FC Edmonton, look for a tasty matchup. Remember that there were several incidents — shoving matches and scuffles in the tunnel — when FCE and Carolina faced each other last season. To say the two teams disliked each other would be accurate. And Franks is a name that crops up as one of the agitators from the RailHawks’ side of the scuffles.

Franks has one career MLS goal, which came in his time with the Chicago Fire back in 2007. That goal came against… Toronto FC.