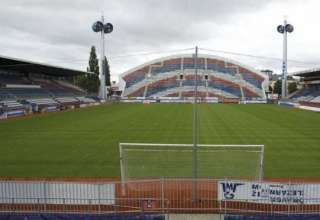 The stadium in Olomouc: PHOTO: JESIN

The Canadian Soccer Association and the Football Association of the Czech Republic have announced plans for a Nov. 15 friendly between the two nations.

The game will kick off in Olomouc, and will be played at 5 p.m. local time, to keep away from the colder night temperatures.

The game will mark the 10th anniversary of the last (and only) time the two nations faced each other. On Nov. 15, 2003, the Czechs thrashed Canada 5-1 in a friendly, with Tomasz Radzinski scoring a late consolation goal for the Canadians after the home side marched to a five-goal lead. Colin Miller was the interim coach of Canada at that time.

The Czechs won’t be going to the World Cup in 2014, as they finished third in a qualifying group that featured Denmark and Italy.

But it will be interesting to see what kind of team the Czechs send out to face Canada. The Czech team that competed in qualifying had plenty of thirtysomething faces.

For Canadian supporters, the most recognizable name of the Czech regulars belongs to Petr Cech; but it might be a stretch to imagine the Chelsea keeper getting called in to start against Canada.

For Canadian coach Benito Floro, it offers a chance to have another look at a team that has yet to score since he took over as the national-team coach. In fact, Canada hasn’t scored a goal in its last eight matches.