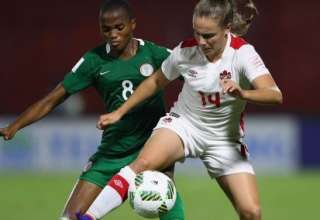 Canada was overrun by Spain in their tournament opener. On Wednesday, critical errors undid the Canadian side as it went down 3-1 to Nigeria at the U-20 Women’s World Cup in Papua New Guinea.

Two games in, and Canada has two losses and a goal differential of -7.

Canada actually took the lead in this one, with Gabrielle Carle putting the ball home after a great run down the left side and pull-back from Deanne Rose. But, just before the stroke of halftime, the game turned on its ear when central defender Bianca St. Georges was ruled to have blocked a cross with her arm in the box. A penalty was awarded, and Nigeria’s Chinaza Uchendu equalized from the spot.

St. Georges got a yellow card on the play and the Canadian team didn’t put up much of an argument; but the ball looked like it caught her up in the shoulder area. Yes, she did leap into the path of the ball, but you could argue that the call was harsh.

But, 40 seconds into the second half, and St. Georges was at the centre of Nigeria’s go-ahead goal. Her panicked clearance attempt went off a Nigerian attacker and right to Joy Bokiri, who made no mistake.

The game was sealed midway through the second half, when Canadian keeper Rylee Foster passed the ball directly to Nigeria’s Chinwendu Ihezuo, who responded to the gift by pushing the ball into the corner of the Canadian goal.

While it will be the mistakes that make the highlight reels, it needs to be noted that Canada launched six shots at the Nigerian goal, while the Nigerians unleashed 18 shots at the Canadian net.

Canada finished the game with only two shots on target. In the previous 5-0 loss to Spain, Canada had one shot on net. This is not inspiring stuff from a program that has pledged to find “more Sinclairs, more often.”