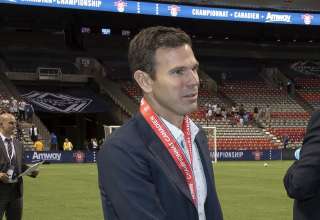 After scoring seven times over two legs against NYCFC in their Eastern Conference semifinal, Toronto FC has established itself as the offensive juggernaut of the four teams remaining in the MLS playoffs.

So, maybe it’s not a surprise that TFC leading scorer and 2015 league MVP Sebastian Giovinco expects the Montreal Impact to park the bus when the two teams meet Nov. 22 in the first leg of their Eastern Conference final.

“We expect a very defensive game on their part, and we’ll get ready for that,” Giovinco said through an interpreter as part of an MLS conference call previewing the conference final.

There’s a possibility that upwards of 60,000 fans will be at Olympic Stadium for next week’s first leg. Of course, moving the game indoors to the Big O means that the game will be played on the nefarious artificial surface. But Giovinco said that the pressure will be on Montreal.

Giovinco said it was the Impact that made the decision to move the game to earn “maximum support” from the Montreal fan base. “The pressure of that choice is one them, not on us.”

But, the Italian star said that it will be fantastic to play in front of such a big crowd.

“Soccer is the most beautiful, most popular sport in the world. It deserves huge attendance.”

There is no denying the romance that this game provides to Canadian soccer fans. Really, so much of the focus will be on the two sold-out stadiums over the two legs, that, for many, the Xs and Os will be secondary.

Patrice Bernier, the native Montrealer who has been with the Impact since the club made the move to MLS, said that the hope is always that the Canadian national team’s performances would be the thing to “ignite interest” nationally in the game, the thing that would inspire more young players to look at soccer as a career choice. But, he understands having two MLS clubs face off in the Eastern finals changes that focus; with Canada already out of World Cup qualifying, it could be high-profile club matches that fires the interest of young players in this country.

Bernier said a Montreal-Toronto Eastern final is “the type of game you want to play.” He said it will inspire youths in those cities to “dream to play a game like that on Canadian soil.”

Of course, playing in front of a full house at Olympic Stadium isn’t new to the Impact. The team played the 2015 CONCACAF Champions League final’s second leg against Club America at the Big O. The Impact, of course, lost that that match, but coach Mauro Biello believes that the team “has been able to learn from it.”

Biello said the team has learned from that CCL final “how to manage emotions, and to stay concentrated for 90 minutes.”

TFC coach Greg Vanney said it will be important for TFC to limit Montreal’s Ignacio Piatti, who was superb in the Impact’s triumph over the Red Bulls in the semis.

“We don’t underestimate him. We know his value to his team, and his ability to create and to finish.”

Vanney said the Reds will have to be aware where Piatti is on the field “all of the time.”

Vanney said where Piatti presents a real problem is his running off the ball, that he anticipates turnovers so well, that when the Impact do take possession of the ball, the Argentine has already created space for himself.

“No question some growth will come out of it,” Vanney said, even though it might take years for us to fully realize what a 401 Derby Eastern Final has meant for Canadian soccer as a whole.