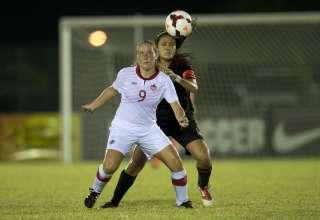 Because both Canada and Mexico had already qualified for the U-17 Women’s World Cup by winning their semifinal matches, the CONCACAF U-17 Women’s Championship final had the feel of a friendly.

After both teams played to a 0-0 draw in Jamaica Saturday, they went right to penalty kicks. No extra time (which is common practice at the U-17 level, as you don’t want teens playing 120 minutes). And the Mexicans triumphed in the shootout, 4-2 — as El Tri and the Canadian women shared in the schadenfreude of knowing that their American neighbours weren’t going to the World Cup.

“I’m really, really proud of the girls. If you look at what this team’s about, it’s about future national team players,” said Canadian Head Coach Bev Priestman on the Canada Soccer website. “I think losing on penalties it’s hard for the girls but ultimately, there have been some girls who stepped up in this tournament and are knocking on the door.”

Marie Mychele Metivier, the tournament’s top scorer with six goals, left the match in the 40th minute, replaced by Jessica Lisi. Emily Borgmann, who was named to the all-tournament team, came off in the 73rd minute.

Before coming off, Borgmann did create one stellar chance, but her low cross across the face of goal was cleared away by the Mexicans before it could be nudged home by a Canadian teammate.

The Mexicans’ best chance to get a goal in regulation came when forward Jaqueline Garcia found herself with an open chance in the box. Canadian keeper Rylee Foster charged the play down, didn’t get the ball, and Garcia went down in the area. But a penalty wasn’t awarded.

Canada didn’t convert two of its first three penalty-kick chances, as defender Simmrin Dhaliwal and Marie Levasseur both had their attempts saved by Mexican keeper Emily Alvarado. Levasseur also had a chance to score the game’s opening goal thwarted by Alvarado in the 33rd minute; Levasseur was in clean on goal, but Alvarado cut down the angle and blocked the shot with her knees.

For the Mexicans, it was their second straight win over a CONCACAF power on penalties. They triumphed over the Americans in the semifinal after a 1-1 draw.