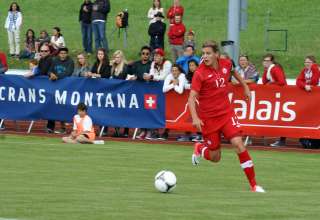 When the results of voting for FIFA’s women’s player of the year is revealed in stages, first Nov. 29 then Jan. 7, it will be a referendum of sorts. We will all get a better sense of how the international community regards Christine Sinclair’s suspension and fine for her critique of Norwegian referee Christina Pedersen following the Olympic women’s soccer semifinal.

Sinclair is on the long list for women’s player of the year. Her coach, John Herdman, is up for FIFA World Coach of the Year for Women’s Football. Shortlists will be announced at the end of November, with the winners being named Jan. 7.

That Sinclair has been nominated is no surprise; she set a new Canadian women’s team record for goals in a calendar year. She led the Olympic tournament in goals.

Her strikes against: No domestic success, as the WPS pulled the plug and she didn’t find work anywhere else, putting preparation for the Olympics at the top of the priority list. Oh, and there’s the suspension.

No matter how good the athlete; when there is a feeling he or she has disrespected the sport, it shows at awards time. If a voter is unsure which way to go, the decider usually is which athlete is a better ambassador for the game. If Sinclair were to finish in the top three, it would be a major signal from the international soccer community that they think that the Canadian star didn’t put the game into disrepute for her choice words on the subject of the officiating in that fateful Canada-U.S. semifinal.

If Sinclair finishes well down the list, it’s a sign that voters shied away from a woman who has accepted her punishment for openly criticizing Pedersen, but at the same time refused to apologize for it.

After Canada lost 4-3 to the Americans after extra time in an Olympic semifinal, an emotional Sinclair told the media scrums after the match that she felt Pedersen had influenced the outcome of the match. Pedersen has become a villain in Canada for calling keeper Erin McLeod on a rarely enforced delay-of-game infraction when Big Red led the Americans 3-2 late into the second half. The resulting free kick led to a controversial penalty award, which was converted by Abby Wambach to tie the match.

Months after the tournament, FIFA slapped Sinclair with a fine and a four-game international-match suspension, which she will serve in 2013.

Was Sinclair justified to stand her ground, or were her criticisms the words of a sore loser? We will find out what the international community thinks, beginning at the end of November.