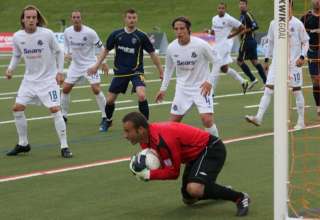 It looks as if Lance Parker and David Monsalve will battle for the role of FC Edmonton’s No. 1 keeper in 2012.

The NASL club confirmed Tuesday that Rein Baart, who got the lion’s share of the starts in 2011, won’t be back. Baart rejected an offer to be a player-coach for the club in 2012.

Baart, a Dutch veteran brought in to stabilize the goalkeeping position, struggled at the start of the 2011 campaign, collecting a couple of red cards and allowing more than a fair share of soft goals.

Because of the suspensions and inconsistencies in his play, Parker — a former Chivas USA keeper — got some time and actually won a Defensive Player of the Week award. But, as Parker pushed Baart for the starting job, the American keeper suffered a compound fracture of his right arm that ended his season.

FC Edmonton had the second-worst goals-against mark in the NASL in 2011. Parker will be healthy in 2012 and is signed for next season, as is Monsalve, the former Toronto FC keeper who was signed late in 2011 and got one start, a loss to the Montreal Impact in the final regular-season match of the season. With Baart gone and both Monsalve and Parker inked for next season, the battle for the No. 1 job is set.

As well, the club announced that assistant coach Edwin Petersen has decided to return to the Netherlands and work with that country’s national soccer association (the KNVB).

“Both Edwin and Rein were integral in the success FC Edmonton enjoyed in its inaugural professional season and will be extremely tough to replace,” said general manager Tom Leip in a release issued by the club. “We wish Edwin all the best as he continues on with the Dutch federation and we are certain Rein will land on his feet somewhere and continue his career as a coach or player.”

As well, FC Edmonton announced that it has exercised the option on American forward/midfielder Shawn Chin. He was primarily used coming off the bench in his rookie season, but did score a highlight-reel goal on a long, curling strike early in the 2011 season against FC Tampa Bay.