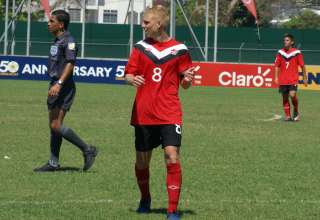 Alderson is an Ontarian; he captained his provincial team at the 2010 Canadian U-16 All-Star Championship. He was on the roster of Portugal FC, one of the many Toronto-area-based clubs in the Canadian Soccer League.

But, being from Kitchener, Alderson lived just outside the 50-mile limit from BMO Field, which would have given Toronto FC exclusive MLS academy rights on the teen. So, in September, Alderson decided to dedicate his future to the Whitecaps rather than the Reds.

Yes, Alderson didn’t live close enough to BMO Field to force him to deal exclusively with the Reds. His family exercised their freedom of choice. Still, to see the captain of the national U-17 choose to cross the country to grow into the professional game, rather than stay close to home with the Reds, was a ringing endorsement of just how good the Vancouver program is.

After all, the Whitecaps have been working with young players in B.C. long before any exec in Maple Leaf Sports and Entertainment came up with the idea of approaching MLS about getting Canada’s first expansion franchise. Make no mistake. While Toronto FC has four years on the Whitecaps in terms of MLS tenure, the Whitecaps’ superior youth system could be the thing that makes it the real “Canada’s team.”

Meanwhile, Diamond Simpson, who made her full senior debut with the women’s national side during the Dec. 9 5-0 drubbing of the Dutch, was named the female U-17 player of the year.