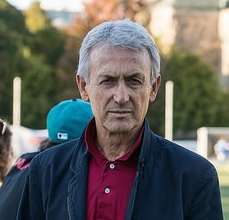 Even though he needed the aid of a translator — and some of the answers were not delivered in perfect English, Benito Floro let us in the media see some of the frustrations he experiences in coaching the Canadian national team.

“Canada needs more attention from the clubs, at least at the same level as the U.S. or Mexico,” Floro said Tuesday.

He admitted that many times, clubs will tell him “don’t take our players” for Canadian friendlies, but he noted that the U.S. coach Jurgen Klinsmann doesn’t seem to have the same problem. “It’s not the same for the United States.”

Floro was speaking to the media as the Canadian Soccer Association confirmed that Toronto’s BMO Field will host a June 16 CONCACAF World Cup qualifier between Canada and Dominica. The match will be the second leg of their CONCACAF Preliminary Competition series. Canada, CONCACAF and Dominican soccer authorities agreed to switch the order of the two legs, as Canada was originally scheduled to host the first leg.

And that might include Tesho Akindele, the Calgary-born FC Dallas striker who Floro said is now “99.9 per cent “ committed to playing for Canada.

“Akindele, I think, is a good boy,” said Floro. “We called Akindele last year for our camp. One week before, someone presented him a big problem; to choose to represent U.S. or Canada. I think he committed a mistake because he was already invited to our camp and then changed his decision.”

Floro said he decided to take two, three or four months to confirm if Akindele was truly interested in representing Canada.

“We are close to an agreement, but we need to fix this matter.”

But Floro finished off his statements on Akindele with a bit of a warning across the bow for all players who hem and haw about national team call-ups.

“Under my control, Canada is never second place.” That is, it should never be option B for a player.

That could also serve as a warning to Junior Hoilett; the Brampton, Ont. native who has yet to make an appearance for any nation. The Queens Park Rangers. Floro said he met with Hoilett face-to-face in 2013, but there still has not been a commitment.

“It’s a difficult situation for him and for us. He’d be a very good player for us.”

But he said Hoilett has to “fight” through the decision on whether to play for Jamaica or Canada.

A BREAK FROM BMO FIELD?
If Canada does beat Dominica, it might be a while before another World Cup qualifier comes to Toronto.

Floro said that his understanding is that there are issues that will prevent the Canadian national team from using BMO Field in qualifiers to come; but there was no confirmation if this had to do with construction or scheduling conflicts.

(THE CSA later clarified this: “There are no conflicts that would force us to choose a different venue than BMO Field for the September round, but we would likely look at other options for the November match.”)

With six other cities hosting Women’s World Cup matches, Toronto was basically the only option for the Dominica qualifier.

But Floro said that, after discussions with Canadian Soccer Association President Victor Montagliani, he knows that he has to look at “two or three” other pitches on which to stage games.

So, what will be the criteria?

“If artificial surface is of the latest generation, no problem.”

Floro said that for friendlies, he must always consider “social matters;” and that is to get the national team to play in many different provinces. But when it comes to a game that counts, he wants the best venue possible.