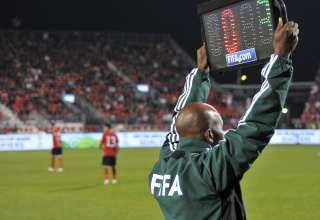 Before marriage, before the kids, I used to set my alarm for god-awful wake-up times on weekends, so I could watch Premiership matches. Living in Alberta, early games would often mean kickoffs well before 6 a.m.

But, as I aged, and technology advanced and gave us the PVR, I realized that it was a far saner option to sleep in as much as having two young children in the house would allow, and watching the game after the family had breakfast. Sometimes the game would need to wait after swimming lessons or dropping my son off at Chinese school.

Then, I realized something. I absolutely loved watching games on PVR. Any time the ball went out for a throw or a corner or play was stopped for a foul, I’d hit fast-forward till the ball was in play again.

And a game that took about two hours of real time to watch, well, it would take just a little more than an hour in PVR time. And I didn’t miss a thing.

Basically, my PVR-soccer life shows just how much time in a soccer game is spent fawning over free kicks, tending to injuries, waiting for the ball to be put back in play.

I think we all know, deep down, that time added on is a fairly arbitrary number. Sometimes it’s three minutes, or four. Or five. We don’t know why.

So, when the International Football Association Board revealed that it would look at a proposal to change the way that soccer is timed: Instead of two 45-minute halves that tick down without any breaks, the game would be broken into two 30-minute halves, with stopped time when the ball goes out of play.

Call me a heretic, but I kinda love it. (But, at the professional level only — more on that later.)

Using my regular PVR-ing of games as a tested-over-time barometer, I can state that 30 minutes of stop time might actually see fans treated to more ball-in-play action than we have now.

I love last-second scenarios in sport. Goalie pulled, face-off in the opposition zone with 10 seconds left. Buzzer beaters. Instead of having a referee check his or her watch and arbitrarily decide when a game ends, how awesome would it be to know that a team, down a goal, has a corner kick with 10 seconds left? That’s what the 30-minute, stop-time half would allow. Instead of time added on, we’d be counting down to zero.

If 30-minute, stop-time halves are too radical, I’d suggest that, at least, time added on should have stop time, to prevent time-wasting and to create those last-second scenarios. Once we get into time added on (let’s say, four minutes), 4:00 goes up on the clock as we hit 90, then the timekeeper takes over.

Of course, the cynic in me understands that the big push to have stop-time in soccer game comes from the need to insert commercial breaks into the game. Clock stopped for a throw? Now, a word from our sponsors! This is where I need to state that, well, I work in broadcasting — I do colour work for an NASL team. So, I totally understand the need to better monetize the soccer broadcast. One of the biggest drawbacks is that a broadcaster really only has ad inventory to sell during halftime and the pregame and postgame shows. I get that it’s a business, and that more revenue streams are needed. Of course, I look at that through the lens of someone who broadcasts second-division games, a level of soccer where teams always need to find new streams of revenue.

As well, this would be an easy change to make at the professional level, where there are stadiums with clocks. I can’t imagine this would be easy if you’re playing Edmonton minor soccer on a weed-laden field located in a south-side subdivision. That’s why the 45-minute half will always survive in some form. Because, at the amateur level, when you’re playing on some mosquito-filled field surrounded by lawn chairs, the referee will always need to be in charge of time. But, heck, various forms of basketball have different ways to time games, so I don’t think it’s a stretch to have different levels of soccer timed differently.

But, to me, there are other pros to this that can’t be ignored. CONCACAF-level theatrics won’t do much to waste time in games, anymore. Thrash around all you want. Fake that injury. Go to town. Throw in some pelvic thrusts, some screams and the feet banging onto the turf. The clock is stopped. All you’re doing is giving the opposition a breather. No more killing time with that genius 92nd-minute substitution.

If the soccer domos agree that this is worth further study, it would obviously need to be experimented with on a small scale. Maybe it would be a way to make the Canadian Premier League truly, well, Canadian! We’ll keep time differently than any other league in the world!

In the end, I think it’s worth at least having a look at the 30-minute, stop-time half. If we can remove the arbitrary nature of stoppage time, if we can take time-wasting out of the game, it might be worth the change.

It might make playing the game go longer than two hours of real time, and that’s a drawback in today’s world of short attention spans.

It is still worth at least a look, though.