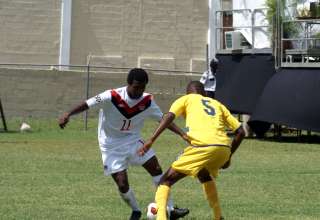 TFC Academy accounted for five of Canada’s goals in an 8-0 rout over Barbados in CONCACAF U-17 men’s championship Thursday in Jamaica.

Michael Petrasso scored three times in just 69 minutes on the pitch, while Keven Aleman scored twice in 58 minutes as the Canadians earned themselves a spot in the quarter-finals of the tournament.

But, as the scoreline suggests, Canada has a lot tougher opposition to come. Petrasso’s second goal came after Barbados’ Diquan Adamson gave the ball away — an all Petrasso had to do was tuck the ball into an open goal.

Two of the three teams in Group D make the quarters. Because Honduras had already beaten Barbados, Canada knew all it had to do was beat Barbados to make it to the next round, even though the team had yet to kick a ball in anger.

But, because Canada’s margin of victory was greater than Honduras was able to achieve, all Canada has to is draw Honduras in the final round-robin game to ensure first place in Group D.

Four teams qualify for the tournament from CONCACAF, plus hosts Mexico, for the 2011 U-17 World Cup. If Canada makes it to the semifinals, it books a place in the tournament.