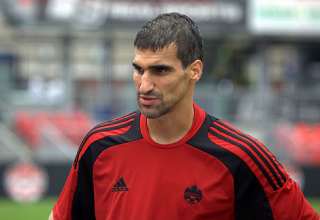 The most-capped player in the history of the men’s national Canadian soccer program has called time on a glorious career.

Brampton, Ont.’s Paul Stalteri won the league-and-Cup double with Werder Bremen in 2004, and made over 150 appearances for the Bundesliga side. He’s the only Canadian to possess a Bundesliga’s champions’ medal. He made more than 40 appearances for Tottenham and then joined Fulham just in time to help the club make a last-ditch push to escape relegation back in 2008.

Stalteri made 84 senior appearances for Canada. He won the Gold Cup with Canada in 2000. He captained the side on 30 occasions.

After nearly two years of rehabbing from injuries, Stalteri realized it was time to end it. The reason it took so long for him to make the formal announcement was because his body was feeling well after surgery, and he was debating the decision in his mind.

“I just felt really good after a long rehab period.”

Stalteri is in the process of getting his coaching badges. He’s been on CONCACAF courses and wants to continue on in the game.

“With the wealth of experience I have obtained over the years, I will bring something back to Canada,” he said. It’s just a matter of where he’ll use those talents, in coaching or management or in another facet of the game.

Stalteri’s favourite national-team memory? Winning the Gold Cup. But, unfortunately, there were many sour notes, too. And it speaks to the state of Canadian soccer in his time with the national team that he can’t pick just one.

“The lows, in terms of qualifying campaigns, it’s not specifically one or the other. There were all of the times that we weren’t able to get into the final round of qualifying.”

And while international soccer has changed in the 15 years since Stalteri first played in the Bundesliga, he understands the challenges the Canadian player faces when he decides to make the jump across the Atlantic. He said that it’s easier for Canadians to go across now, but it might be harder for them to fight and keep their places.

“Myself and my good friend Kevin McKenna made our debuts on the same day, Kevin with Cottbus and myself with Bremenm, we were the first Canadian players in the Bundesliga at that time. But, by now, Canadians have played in most of the major leagues across Europe.”

But, a player has to pick the right time to go. Go when you are too young, and you might get lost in the shuffle on a youth side. Go too late, and you’re considered too old to be coachable. And, Stalteri has noted that the trend now is for teams in Europe to push the domestics — something that’s especially true in Germany.

“They are pushing their own domestic players more than they want to push a foreign player. That’s a fact…. you have to be that much better a player to have that chance.”

“You are the model for all our young players.”

FC Edmonton’s Colin Miller who is one of two former Canadian national teamers to have a head coaching job in North America (Frank Yallop of the San Jose Earthquakes being the other); and he was thrilled to hear that Stalteri is looking to give some of the expertise he picked up in Europe back to the game in Canada.

“He’s been a terrific ambassador for Canadians playing abroad.

“He’ll certainly have worked under some great managers, as I did. And once you do your qualifications, then it’s like taking a driving test. You’ve got to do as the instructor says and, once you’ve got your licence, you can put your arm out the window and turn the radio up. So he will have learned things along the way, some things he’ll have agreed with and some he has disagreed with. And I think it’s great that Paul wants to come back to the Canadian game, because the Canadian game has been good to him.”