May 18, 2022
9 New Articles
Home Global Game CONCACAF On CONCACAF, Canada and the CCL: One-on-one with RSL’s Will Johnson 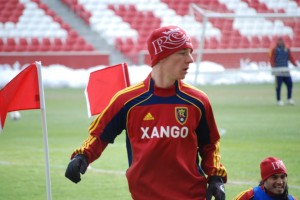 Will Johnson trains with Real Salt Lake at Rio Tinto Stadium on Monday, ahead of Tuesday's CCL clash against Columbus. PHOTO: RANDY DAVIS

The 11 caught up with Will Johnson at Rio Tinto Stadium in Sandy, Utah, in the midst of final preparations with Real Salt Lake for the final leg of their CONCACAF Champions League Quarterfinal matchup against the Columbus Crew. We asked Will about the rumors swirling that FIFA may be set to grant CONCACAF a fourth spot for the 2014 World Cup in Brazil, and about Team Canada’s important summer this year in Gold Cup action.

The 11: What are your thoughts on the potential for CONCACAF to get a fourth spot in the upcoming World Cup?

Johnson: That would be huge, but do be honest we have performed so poorly the last couple of times, that I don’t think we’ve even made it into the top six. Obviously it gives you a better chance, but there’s still a lot of work that we need to do. I’m excited about where things are at with Canada, but it still needs to be realized that we have a long way to go.

The 11: What’s on the calendar for this year leading up to the Gold Cup?

Johnson: There’s a 10-day camp for Europe-based guys that I won’t be involved in. I’m sure there will be some sort of camp again before the Gold Cup. But the Gold Cup for us is preparation for World Cup qualifiers — that’s how we’re looking at it. So there’s not going to be a lot from now until the Gold Cup, which is good because I want to be here (with Real Salt Lake) and focused on RSL.

The 11: What will your role be with the Canadian National Team?

Johnson: I like to think that I’m going to be one of the guys who can help us qualify for a World Cup. I’m a guy that can bring some bite, and link-up the play from the back four to our attacking options. We’ve had a lot of good attackers, but I don’t know if we’ve ever put it all together with a good team philosophy involved. And I think I can be that guy to link the back four to the attacking midfielders, and swing a lot of balls and help out the defenders. That’s kind of what I do here. That’s something that’s worked well for us here to be successful , and I think it can definitely help the national team.

The 11: What are your thoughts on Tuesday’s CCL matchup against Columbus?

Johnson: I’m just excited. It’s a big opportunity for us. There’s been a lot of talking and a lot of emphasis, but it doesn’t matter much, we’ve just got to go out there and perform. It’s a big, massive game for us — there’s no way to understate that. We’re just excited and ready to go.