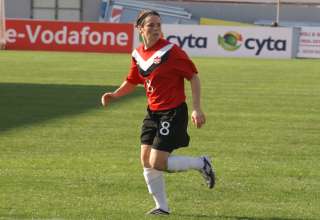 Diana Matheson’s injured knee won’t be ready in time for her to play for the Canadian national team at the CONCACAF Olympic qualifiers.

She will be replaced by Brampton. Ont.’s Alyscha Mottershead, a holding midfielder who had two assists for Syracuse University in 2011, but played in every game for the squad.

The Canadian Soccer Association tweeted that this move was likely on Saturday, but made it official Sunday.

It wasn’t a major surprise. Coach John Herdman told the media last week that Matheson had “complications” after knee surgery and it wasn’t sure if she would be ready for the Olympic qualifiers. Canada begins qualifying Jan. 19 at B.C. Place in Vancouver.

“It is a big loss not to have Diana Matheson for this tournament, but it opens the door for a young player like Alyscha Mottershead to make her mark on this team,” said Canadian head coach John Herdman. “It is massive not to have Matheson and her experience on the pitch, but she will be there to support us off the pitch in Vancouver.”

“It’s a huge honour to be part of something so big,” Mottershead told Syracuse’s website. “It’s been my dream for a long time so it’s exciting for it to come true.”