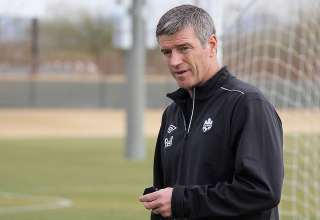 Colin Miller thinks back to a time, not even two years ago, when his coaching career was at a low point.

It was late October of 2011 when the Whitecaps made the announcement that Miller, who was an assistant coach with the club, was out of a job. To make matters worse, there was awful news on the home front, as well.

“I lost my job, and then my dad passed away 18 days after he was diagnosed with cancer,” Miller said Thursday. “And I thought to myself, can I take any more kicks in the goolies?”

Fast forward to the present. Miller has his FC Edmonton squad just three points off the top of the NASL table. And he’s beaming with pride after the Canadian Soccer Association confirmed that he’ll be the interim coach of the national side once again. Miller steer the Canadian team for its May 28 friendly against Costa Rica at Commonwealth Stadium. It will mark the sixth time Miller will coach the Canadian senior side. But this will be the first time a Miller-led Canadian team will play on home soil — and, for that fact, Miller is particularly excited.

“It will be a massive game. Costa Rica is getting ready for a World Cup qualifier so I would assume they are bringing their full squad.”

Miller won’t have that kind of time to prepare. He is only expected to have the full roster of 18 players all in camp a day before the game, giving him precious little preparation time. And, callups from the Montreal Impact and Vancouver Whitecaps are unlikely, as they will play the second leg of the Amway Canadian Championship final May 29 at BC Place, just 24 hours after the Canada game.

Yes, some of the European-based players will come over early — and we just might see some in the Clarke Stadium stands on May 26, when the Eddies host Fort Lauderdale. But the MLS players aren’t expected till the Monday — with the game on Tuesday.

Canadian technical director Tony Fonseca is in charge of squad selection. Miller confirmed they are “reasonably close” to making a roster announcement.

Miller said he will have the ability to make a case for a player or two, though.

“I think that if I feel strongly enough about a player, Tony will listen to my assessment,” said Miller.

Commonwealth Stadium continues to undergo a renovation. Half the stadium was closed for FC Edmonton’s Canadian Championship match in April against the Whitecaps. The old orange seats are being replaced section by section with new green and gold seats that fit the CFL Eskimos’ colour scheme.