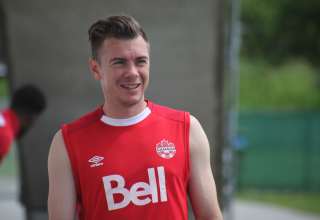 Nik Ledgerwood thinks that this version of the national team is far different than the one that went down to Honduras in 2012 and was eliminated from World Cup contention with a program-shattering 8-1 loss.

Even if some of the players are the same, four years more experience makes a world of difference.

“To be honest, I think we’re a more experienced team now than we had going in there four years ago,” Ledgerwood said Thursday. “Now everyone knows what to expect, it’s not the unknown. We know how much we’ve got be switched on and how much it means to the country and all of us. Everybody is taking this very seriously, and I think we’ve got a great group of players. I think everybody expects to get a result down there.”

Ledgerwood will play with FC Edmonton Sunday at home to Puerto Rico FC, then leave Monday for Canada’s training camp in Orlando, Fla. Canada will play in Honduras Sept. 2 before heading to Vancouver for a Sept. 6 game against El Salvador. Each of those three teams is vying to finish second in Group A behind Mexico, and earn a spot in the Hex — which is the final stage of CONCACAF qualifying. Honduras and Canada are tied for second, but Honduras’s goal difference is three better than Canada. So, if Canada loses to Honduras Sept. 2, the only way it gets the spot is by beating up on El Salvador and hoping Mexico mercilessly pummels Honduras.

But, conditions will be tough in San Pedro Sula. The game will kick off in tropical heat, at 3 p.m. local time. And, as is always the case when a Canadian side travels to Central America, the team will be subjected to a variety of distractions, from bus drivers who don’t know the way to the training ground to all-night parties just outside the team hotel.

“Of course. Always, going to those countries, there’s always something that happens, or has been done in the past,” said Ledgerwood. “Look, three o’clock kickoff. Last time, it was a national holiday for them. And that time in Panama they had the fireworks show outside our hotel. It is always expected going down to those countries, and I think we now have the core group of guys who are used to that and it doesn’t play a factor anymore.”

And, to quote a very Canadian hockey cliche, the Canadians can’t get overly hyped for the Honduras game; they have to be very business-like in their approacl

“As much as we’re excited and looking forward to it, we can’t treat it as the be-all, end-all,” said Ledgerwood. “We have to treat it like any other game, and that’s what we’ve been doing in the qualifying circles. We’ve been getting prepared, doing a lot of video work, tactically I think we’re at the best we’ve been in a long time. And I think that’s going to be huge going down there. So, I think Benito has prepared us exceptionally well for the two games coming up. Now it’s just trusting our ability and going down confidently and doing the business.
“You only have three or four days to prepare, and most of that is recovering from the games on the weekend that we’ve played, because everyone is travelling in from all over the country, from overseas. So, I think it’s making sure everyone is fit, healthy and on the same page and switched on, ready to go.”