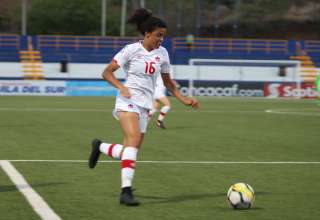 Andersen Williams’s 88th-minute header bounded right through a pack of Haitian defenders before it crossed the line — giving Canada a 2-1 win and a berth in the U-17 Women’s World Cup.

The third-place game of the CONCACAF U-17 Championship is arguably more important than the championship match. The winner of the third-place match gets a berth in the World Cup, the fourth-place side gets, well, nothing.

Williams got the winner after Jordyn Huitema — scorer of Canada’s opening goal, cushioned a header towards her off a corner kick. Williams threw her neck into it, and the ball squirted through the pack and into the goal.

The goal saved some blushes for Canadian keeper Anna Karpenko. She had clearly been Canada’s top performer over the course of the tournament, but made an error in judgment that led to Haiti’s penalty-kick equalizer.

After Canadian Caitlin Shaw gave the ball away in the middle of the park, the Haitians got the ball to forward Melchie Dumonay. The Haitian attacker was angling away from goal and, while she was in the penalty area, the only real risk was that she would be able to do a 360 before she ran herself into touch. But Karpenko came off the line to challenge Dumonay, and held her head in her hands after she brought the Haitian down, giving up a no-debate penalty.

While Canada did get to the World Cup, once again its play was anything but convincing. The two goals scored came from route-one football and a set piece. Williams’s winner came off a corner and Huitema’s opener came when Shaw’s long route-one hoof found her teammate running past the Haitian defence.

Canada struggled to create chances by playing the ball out of the back or the midfield, or playing the ball on the ground. If anything, when the team had success, it was because they went back to the old Even Pellerud philosophy of using size and strength to win 50-50 balls.