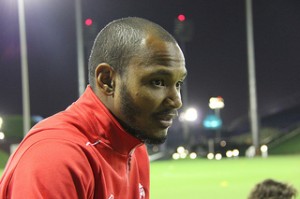 After his Designated Player contract with FC Dallas expired at the end of the 2012 season, De Guzman spent half a campaign with Jahn Regensburg of the Bundesliga 2. It was a mixed bag for the former Toronto FC DP; he got lots of playing time, but the team couldn’t pull itself out of the relegation nosedive. Regensburg will not be back in Bundesliga 2. next season.

But de Guzman won’t be back with Regensburg, either.

“For me, it was a chance to get back into Europe,” said de Guzman, who was a key part of the Deportivo La Coruna squad and regarded as one of La Liga’s better holding midfielders before the move to MLS. “For six months, I got to play every minute of every game. Even though the club struggled it was a chance for me to showcase myself. There has been interest from a couple of second-division Bundesliga clubs and some from other part of Europe as well.”

De Guzman said what’s best for his family will be a primary factor in his decision.

At 32, he is one of the elder statesman of the Canadian men’s program. And, training in Edmonton ahead of Tuesday’s clash with Costa Rica, he understands that he’s a mentor to many of the young Canadians in the lineup. De Guzman said “moreso now,” with the young groups that have been called into Canada camps in 2013, he is noticing how his role is changing.

“We are working on rebuilding the national program.”