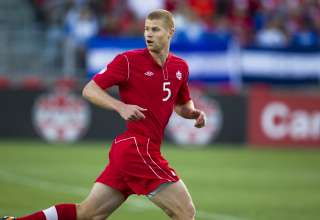 On the weekend that Quebec’s team made its MLS debut, another Quebecer made a major, ahem, impact.

Andrew Hainault’s goal two minutes into stoppage gave the Houston Dynamo a 1-0 win over Chivas USA Sunday, as the Dynamo completed on the first of seven road dates to open the season as it waits for its new BBVA Compass Stadium to be ready later this season.

Hainault scored some big goals for the Dynamo last year — including a late-season marker against the Portland Timbers in a game that had huge playoff implications and a playoff tally against the Philadelphia Union. Both of those goals came off his head.

But, on Sunday, Hainault scored with his left foot.
Hainault, as per usual on corners, had come up into the opposition area to act as a target. But, the ball came out to the top of the box, where the Dynamo’s Adam Moffatt got it and hit a low, hopeful drive. Chivas’s back line was slow to push up, meaning Hainault, still in the box, was onside. He stopped the low shot and, with a touch that was more indicative of a seasoned striker rather than a hardened defender, was able to spin and then smash a left-footed shot into the net.

Hainault has been out of the Canadian national-team picture since he decided last October to take a pass on a World Cup qualifier that Les Rouges was heavily favoured to win over St. Lucia, as he felt he needed the time off to prepare for a Dynamo match that had heavy playoff implications.

But, as we head towards June, and the resumption of Canada’s drive to make it to Brazil 2014, you have to think Hainault has to force his way back into Stephen Hart’s good books. After all, if you go from late last season to early in the 2012 MLS campaign. Hainault has actually become one of the Dynamo’s most dependable, ahem, goal-scorers.