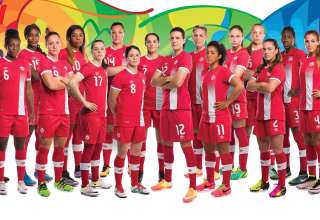 With regular No. 1 Erin McLeod out of the equation with a career-threatening injury, Stephanie Labbe has taken over as the new starter of choice. But who else goes on the trip? Despite the fact that her broken wrist hasn’t healed, Sabrina D’Angelo was named to the final squad. And, with there being only 18 spots on an Olympic rosters, there wasn’t room for more than two keepers. So, young keeper Kailen Sheridan will join a reserve squad of four players — that also includes forward Gabrielle Carle, midfielder Kaylyn Kyle and defender Marie-Eve Nault.’

“With Sabrina and the recovery on her injury, she’s in great hands,” said Herdman. “She’s got good medical care around her, she’s going to be working around the clock to fit the return-to-play plan, which has her arriving back on the pitch in around the July 20 mark. That’s an eight-week turnaround since (the injury), which is tight. She’s young, it’s not the hand that she’s fractured before, so there’s an anticipation she’ll turn around well as long as we manager her carefully..”

But, Herdman said that, of any of the four taxi-squad players, Sheridan will be the one who will be kept closest.

“We’ve committed to keeping Kailen Sheridan close to the team” said Herdman. “We took her into the Algarve Cup to give her some game time there. And she’ll be training every day with the team in preparation that something does go awry with D’Angelo’s recovery.”

And he said he has little worries about Labbe, who he said is in “good form” at the moment.

Carle, a teenager, was left off the main squad in favour of the veteran, Melissa Tancredi. Herdman admitted that Carle’s hopes were dashed due to the fact she wasn’t available for two recent friendlies against Brazil.

“Unfortunately, with the injury that was the high ankle sprain, she missed an opportunity to be assessed against the Brazilian lineup in Ottawa and Toronto, which were big occasions.”

He said that Tancredi, who scored several key goals at the 2012 Olympics, is “still in great physical shape and has a raft of experience.”

Herdman said his team “will have to find that bit of an X-factor” in order to compete with what he refers to as the tier-one teams participating in the Olympic women’s soccer tourney. And he believes that transition play and set-piece conversions could determine just how far Canada goes.