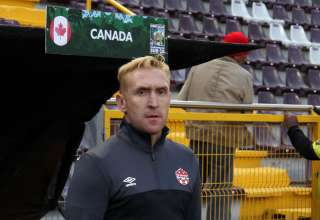 For a Canadian league to survive and thrive, it has to be more than giving Canadian players a place to play. It needs to be about giving Canadian coaches the chance to work in professional environments. It’s about having Canadian administrators and general managers.

Former Canadian youth-team coach Rob Gale was unveiled as the general manager and  coach of Valour FC in Winnipeg Tuesday morning. Gale lives in Winnipeg, is the former technical director of the Manitoba Soccer Association, and this a move that surprises absolutely no one. Honestly, it would have been a shock if Valour FC didn’t hire Gale, whose name is synonymous with soccer in Manitoba.

“The people in this province, and particularly the soccer community, have given me and my family so much,” said Gale.

“The Canadian Premier League, as we all know, will be a league for Canadians, by Canadians,” said Gale. “But this team is going to be a team for Manitobans, by Manitobans. It will have a Manitoban in me running it, Manitoba staff around us and Manitoba players playing for us right from the very first year. It will be of the people and for the people. I don’t think this can be understated. Our kids were born here, are growing up here, we volunteer in their schools and their soccer clubs and their other activities.”

And he suggested that the team’s footprint would initially include Saskatchewan and Northwestern Ontario, as well.

Gale took over as coach of  the national U-20 program in 2014, and took that side through two World Cup qualifying cycles.

But, in both the 2015 and 2017 cycles, Gale’s teams didn’t qualify for the U-20 World Cup. The team that Gale set up for the 2017 qualifying process showed fantastic potential, including a 2-1 win over Marcus Rashford and England. But, the 2017 team was decimated by injuries to key players such as Marcus Godinho, David Choiniere and Shamit Shome, and the final kick in the teeth was Ballou Jean-Yves Tabla’s decision to not play for Canada at the CONCACAF Championships. Gale was forced to bring a team to the CONCACAF Championships that wasn’t close to the team that showed so much in that win in England.