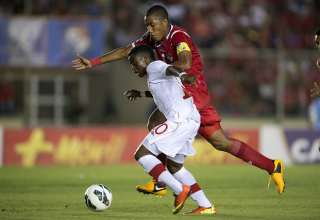 Hanson Boakai, in white, rides a challenge in a U-17 match against Costa Rica. PHOTO: CANADA SOCCER/MEXSPORT

The two teenagers were enduring an average Alberta 6 C autumn afternoon, with a breeze that made it feel a lot colder. But, on Saturday, they will U-17 team coach Sean Fleming on a series of flights that will take them from Edmonton to the United Arab Emirates, where temperatures were above 40 C on Friday.

Needless to say, neither Boakai nor Lopez will be needing the tuques in Dubai, where Canada will face Austria, Iran and Argentina in the group stage of the U-17 World Cup.

Lopez, Boakai and FCE Reserves keeper Christian Kaiswatum are under do-not-train orders till they join with the U-17 national team. Fleming is leaving nothing to chance, and he doesn’t want his players getting knocks in a scrimmage.

For both Lopez and Boakai, two players who weren’t born in Canada, representing their adopted home country is a feeling that’s too good to be true.

Lopez, is from the mountain city of Manizales, Colombia, and when he and his family first came to Canada, they had no money. Now, he’s going to jet off to one of the richest parts of the world.

“We found out a week ago,” Lopez said of the callups, which Fleming confirmed Thursday. “But, when the official list came out and your name is on it, it’s a feeling of relief. You can share the news with your family. It’s so exciting that I can’t sleep at night.”

Lopez’s name may not be familiar to those following the Canadian national-team setup. But he’s a midfielder who can also fill in a defender, and his versatility makes him attractive to the coaching staff. In tournaments like the U-17 World Cup, coaches often ask players to go out of position; the fact that Lopez feels comfortable in a variety of different spots on the field is a plus.

Lopez understands what a good performance at the World Cup can mean for his career.

“You have so many scouts in one place, and it gives players the chance to help determine where they’ll go I the future, whether you are looking to go to university or making a go of it for a pro career.”

Boakai, however, is no stranger to Canadian soccer supporters. He can play in the midfield as the string-puller, he can play up front. And he was one of Canada’s focal points at the CONCACAF championships, which saw the team qualify for the World Cup. He scored a cracker of a goal from outside the penalty area in a match against Costa Rica. Boakai is one of the country’s top teenage prospects.

But even though he’d be one of the first names you’d think of when asked about youth soccer in Canada, Boakai says he was still nervous and excited ahead of the final roster being named.

“When I came to Canada from Africa, I never imagined that I’d go so far in soccerIt means a lot to me to play for Canada; Canada has done so many things for me and my family.”

And Boakai said he’s looking forward to getting together with his old teammates again. Even though they come from European academies, Canadian clubs and the four Canadian professional teams, it doesn’t take the group long to bond.

“The national team is like a family,” said Boakai. “We get together, we hang out all the time. We go everywhere together as a team, and we love each other like family.”

And, Sadi Jalali, their FC Edmonton teammate who played for Canada in the previous U-17 World Cup and scored against England, has been offering the two plenty of advice. He’s told them what to expect: The pressure, the level of competition.

At least the heat will only be “stifling” and not “oppressive.” To keep players out of the worst heat of the day, games don’t go till the evening. Canada doesn’t play before 9:30 p.m. local time.

Coach Colin Miller said he envies the three kids. “They’re getting the opportunity that I didn’t get as a player,” said Miller.

In 1986, Miller was named an alternate for the World Cup squad. That meant he and three other players waited in Vancouver in case any of the players in Mexico got injured. While his name was on the squad list, he didn’t leave Canada.

“It’s a fantastic moment for them,” Miller said of the young charges.