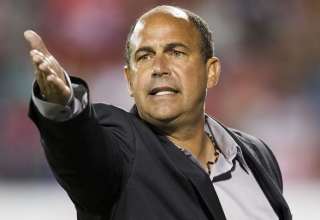 The writing was on the wall as soon as the final whistle sounded after Tuesday’s World Cup qualifying 8-1 loss to Honduras, which cost Canada the a place in the Hex. Hart said after the match that he was sure Canadian soccer supporters would never forgive him for what was one of the darkest days in the history of the national program.

CSA president Victor Montagliani said that he will look for the “best candidate” for the job, which means that the coach would need to know what it takes to go down to Central America and get results.

“Obviously (going to Central America) is a psychological hurdle that has existed for a long time in this program.”

The CSA will look at the best candidates, and there’s no requirement for the coach to be Canadian. A new technical director is expected to be hired by the end of the month.

Montagliani praised Hart, calling him an “exceptional model” for Canada.

Montagliani said the fact the loss caused so much grief across Canada is proof of the progress the soccer program has made, in terms of entering the sporting mainstream.

“A lot of positives came out of the process, and that includes the engagement of our fans.”

And, while Montagliani conceded that it was the 0-0 draw at home to Honduras that “did it” to Canada, not the 8-1 loss on the road (as a win at home would have given Canada enough points to qualify), he said that the new coach will still be given the power to select where the national team plays. He said that decision should not go to anyone else in the CSA.

“I was at all the games at BMO Field, and I am not sure we can blame the atmosphere… (Where to play) the decision should be made by the head coach. I don’t think that philosophy will change.”