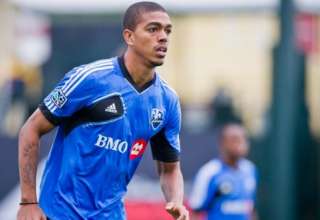 When midfielder Bryan Arguez was told by the Montreal Impact brass last week that he was being loaned out to FC Edmonton, his initial reaction was disappointment. But, now, after playing in just four reserve matches with the Impact this season, Arguez is looking forward to getting back into the rhythm of playing again.

“It was disappointing,” Arguez said of his time with the Impact. “It didn’t work out the way I was told it was going to work out. I just never got the chance. There was a time when the team had lost three games in a row, and I thought I was going to get a chance, and it didn’t happen. And, when we played D.C. United on the road, we started almost an entirely different lineup and they still didn’t give me a chance.. But I can’t dwell on the past, I have to make the most out of my situation here.”

Arguez played with the Fort Lauderdale Strikers last season, and caught the eye of incoming Impact coach Jesse Marsch. Over the winter, the pair met to talk about the kind of role Arguez could play with the Impact in its debut MLS season. Arguez became one of the team’s first signings — and fans heard very little from him since. He’s been healthy, he’s been willing, but his chance never came.

“I never had a problem with Jesse,” said Arguez. “We spoke in December and January and I got a really good vibe from him. He said that I’d have the chance to play, but it didn’t work out that way.”

Arguez is a holding midfielder that FCE has coveted since last autumn, when he helped the Strikers crush the Eddies 5-0 in the first round of the NASL playoffs. FCE even offered Arguez a deal, but he was already focused on a move to MLS. In fact, he said he wasn’t aware FCE had made an offer for his services until this week.

Now that he’s with Edmonton, he will try and help his new club reel in his old club. FcE sits seven points behind the Strikers for the final playoff spot in NASL.

“Now it’s a chance for me to continue my development as a player and do what I can to help this team make the playoffs,” said Arguez.

With just a handful of reserve games under his belt, is he ready to go Sunday, when the Eddies, wearing the orange retro Drillers shirts, take on the Tampa Bay Rowdies?