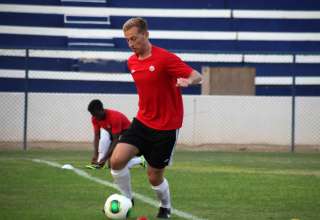 The Argentines scored just seconds before the first half came to a close, and again right after the second half kicked off. Those two goals sentenced Canada to an early exit from the U-17 World Cup in the United Arab Emirates.

The final score was 3-0, but the damage was done by those pair of goals wrapped around the halftime break. Canada showed its nerves right off the opening kickoff, as holding midfielder Jordan Haynes attempted a drop pass. But the ball went into a no-man’s land, and Argentine forward Ivan Luis Leszczuk picked off the ball, and stroked a shot over the bar just six seconds into the match.

But, while the Argentines dominated possession through the opening stages of the game, the favourites weren’t able to create more clear-cut chances. Really, most of the first 45 minutes were cagey in nature, with Canada soaking up the pressure, and the Argentines looking unwilling to up their play a gear. Canada’s Hanson Boakai had the best chance for the men in red, but his bad-angle effort in the 20th minute was clipped wide of the Argentina goal.

But, just as the first half entered stoppage time, the game changed. After a giveaway in the middle of the park, the Argentines broke forward in numbers. Leszczuk had the ball on the left side, then cut inside, bringing the defender with him. He then slipped the ball against the grain back to the left, where Joaquin Ibanez came steaming in and then slammed a shot into the corner of the net.

Instead of settling down at the half, the Canadian kids looked as if they were still on the ropes when the second half began. And, a minute after the kickoff, Argentina had doubled its lead. Nicolas Tripicio crossed the ball from the right. And even though Matias Sanchez had Canadians Eric Davies and Andrew Gordon in his area, they didn’t jump, and he did. His head found the ball, and then the ball went into the corner of the goal.

Canada did have chances to eat into that lead. In the 61st, off a corner, Jordan Hamilton headed the ball to the middle of the penalty area, where Elias Roubos got a foot to it. The attempt spun off of Roubos’s foot and went over the bar. Then, in the 70th, Hamilton found himself in alone, with a golden chance to score, but hesitated and allowed keeper Augusto Batalla to come off the line and block what was a meek effort.

Finally, with 15 minutes to go, Argentina rubbed salt in the wound, in rather spectacular fashion. Sanchez floated a wonderful shot from 25 yards out that found the top corner of the goal. But the damage had already been done.