January 23, 2021
9 New Articles
Home Global Game Europe Zero is my hero: Despite being shut out in two of three matches, Canada takes third at Algarve Cup 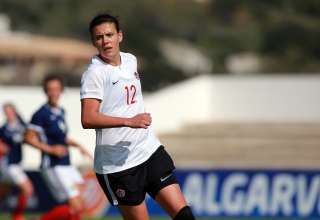 You have to give Kenneth Heiner-Moller, the coach of the national women’s team, and his charges some credit.

To finish third at a tournament, in which more than three teams were participating, without scoring a goal in open play? Impressive. With only one goal in three games? That takes effort. Not since the Seattle Sounders won MLS Cup in 2016 — without getting a single shot on target before the penalty shootout — has a team been rewarded for being as ineffective in front of goal.

Canada got the third-place spot in the Algarve Cup with a 6-5 shootout win over Sweden after the game finished in a, you guessed it, 0-0 draw. Wednesday’s 0-0 effort followed a 0-0 result with Iceland and a 1-0 triumph over Scotland which saw Christine Sinclair score the winner on a penalty.

Last week, I suggested that it was too early to panic, that the team might some time together in order to rebuild the offensive chemistry. But, after three games in a week, plus all that training time together, there hasn’t been any real improvement in Canada’s attack. And, outside of Sweden, Canada hasn’t faced what former women’s team coach John Herdman would call “top-tier opposition.” As we steam towards the Women’s World Cup, Canada isn’t looking like a team whose attack would scare the likes of the United States, Germany or France. Heck, right now, even Cameroon, who Canada will play first at the WWC in France, might be thinking there’s a way to get a point if it can batten down the hatches.

Really, where Canada finished at the Algarve Cup didn’t really matter. First or fifth or eighth, whatever. What’s important is that the team has begun the building process towards France ’19, and that means clicking offensively. Fair play, Canada’s defenders looked good through the tournament, and Sweden, outside of a seeing-eye effort that struck the bar, didn’t do much to trouble keeper Stephanie Labbe before the shootout. But, when it came to the offence, it felt like Canada was always a step short. A ball was placed just too far ahead for a striker to run on to. A cross was put too close to the keeper. A pass in the final third was left just short enough for a defender to recover.

At the Algarve Cup, no offence + steel defence = third place. But that’s not going to be the case when the stakes get higher. A spark is needed. The last thing Canadian soccer fans want is that the Algarve Cup turns out to be the canary-in-a-coal-mine moment that is warning us that we don’t have the firepower needed for France ’19. World Cups aren’t won on the backs of 0-0 draws and penalty shootouts. There will be a time when Canada will be forced to score two, maybe three times to win a game. If there’s anything Canada needs to do right now, it’s to find a way to turn chances into goals. Honestly, no one wants to hear the old adage about “we’re creating enough chances, we just need to convert them.” Soccer is about putting that ball across the line. There are no effort ribbons.

But third place on one damn penalty goal in three matches, that’s a good trick.

Two games at Algarve Cup, no goals from open play

Right now, Canada is one win, one draw at the Algarve Cup because, really, their goal hasn…