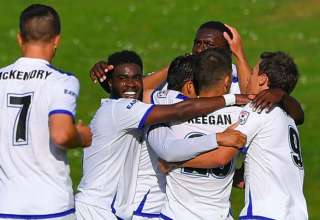 Sometimes it’s easy to pick out the dominant storyline from a game, and build a narrative from there.

But, there were so many wild swings in FC Edmonton’s 2-1 win at San Francisco on Saturday night, it’s hard to know where to begin.

From the get-go, this was wild, end-to-end stuff, and a 2-1 scoreline didn’t really do it justice. But the Eddies are now undefeated in four, and can boast eight goals for in their five fall-season matches. Not bad for a club that finished bottom of the league in goal-scoring for the spring season.

But, to the match itself. Just a few minutes into the match, and defender Karsten Smith, in for the injured Albert Watson, was given a yellow by referee Alex Chilowicz for a kick to Dagoberto’s midsection. Some refs would have pulled out a red for the infraction; but, so early in the match, Chilowicz decided to give Smith a bit of a longer leash.

Things, though, got even more interesting when Smith was called for going over Heinemann’s back; he got a talking-to from Chilowicz rather than a second yellow, and it was clear that FCE’s defender was leading a charmed life to that point.

The Eddies then took the lead at the half-hour mark on the counterattack. After a Deltas’ attack was dispersed, Dustin Corea took the ball up the middle of the field and played the ball forward for Tomi Ameobi, who made a clever turn and then put a low shot past San Francisco keeper Romuald Peiser.

“This was the Eddies of old,” FCE coach Colin Miller said after the match. “We knew we had to set our stall to be reasonably difficult to break down, and hit them on the counter.”

Heinemann had an open header to equalize in the 35th minute, but put it just wide. Now, Heinemann is a man who, as a Whitecap, Fury and Rowdie, scored goal after goal against the Eddies. Seeing him miss a chance was a sight to see.

But more misses would come in the second half.

Before that, though, Shawn Nicklaw’s volley off a corner kick could have stretched the Eddies’ lead to two, but he was denied by a sprawling save from Peiser.

Before the half ended, it was Eddies’ keeper Tyson Farago with the heroics, leaping backwards to claw Tyler Gibson’s looping header off the line.

Thirty second into the second half, and Heinemann missed again from close range, this time putting an inch-perfect cross from Pablo Dyego over the bar.

In the 53rd, minute, Heinemann put a shot off the post when it was easier to score, after a deft pass in the box from Dyego.

Finally, in the 62nd, San Francisco tied the match on a penalty from Dagoberto. Chilowicz ruled that Jackson Gonalves had been shoved to the ground by, of all people, Smith. Yes, the contact was minimal, and Jackson went down in true I’ve-been-shot CONCACAF fashion; but Smith, it could be argued, shouldn’t have even been on the pitch.

But, two minutes after the equalizer, the Eddies rallied to take back the lead. After a scramble in the box and a fumble from Peiser, Zebie put away the loose ball — his first NASL goal.

“At times, [Allan] gets in around the goal, a bit like [Shamit Shome] did for us last year,” said Miller. “He gets his chances but can’t score. I think that range was perfect for Allan and, anytime we have Allan up on the goal-line scoring goals is a good sign. I thought his overall performance alongside [Ben] McKendry was immense.”

The Eddies, though, didn’t take to prosperity all to well. Minutes after taking the lead, Smith once again took down Dagoberto, and this time Chilowicz wasn’t in a charitable mood. Smith got his second yellow and the Eddies were down to 10 men.

Yet, the Deltas didn’t keep the advantage for long. Just 12 minutes after being introduced into the game from the subs’ bench, Canadian Kyle Bekker was shown a straight red for a tackle from behind on Pape Diakite.

The game had more twists. There were football lines on the Kezar Stadium grass, and Farago was fooled by them in the 79th minute. He brought the ball out of his box with his hands before proceeding with the drop kick; the football lines provided the illusion that he was still inside the penalty area.

But the ensuing free kick from Dagoberto went off the wall.

Still, one more twist to the tale; a shot from Dyego came crashing off the bar. The rebound came to the head of Dagoberto, but Farago was in the right place at the right time for a desperation save.