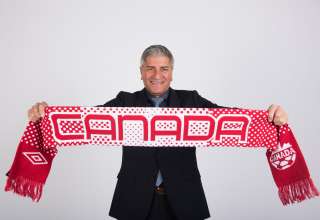 Canadian national men’s team coach Octavio Zambrano says that, since taking over the team, the program hasn’t truly been his own. That will change in 2018.

Zambrano, who was named the head coach of the national program in March, said he will be instituting some “major changes” (his words) into the way Canadian players are scouted, and that he plans to significantly increase the size of the men’s talent pool.

“So far, this has been a rewarding experience,” Zambrano said Wednesday. “What I had thought about Canada, about the talent of the Canadian player, has been corroborated time and time again. I see a great future in soccer for Canada.”

Zambrano said the changes he’s bringing in “will allow more players to be seen and enlarge the player pool.”

He said that, in the past, Canada depended on regional camps. Technical directors from the various provinces would be sending players they recommended to camps that lasted three to four days each. There were showcases that saw youth teams from the three Canadian MLS teams play off against each other. Last year, a youth team from FC Edmonton also participated.

But, according to Zambrano, the old way didn’t allow for enough players to be seen.

So, instead, Canada will have three regional base scouts. One based in British Columbia, one in Toronto and the other in Quebec. Those superscouts will have regional scouts who report to them. For example, a local scout for Edmonton and/or Calgary would report to the B.C. scout. A scout in the Atlantic provinces would report back to Quebec. A player who might be seen in southwestern Ontario would be reported back to the Toronto scout. In Zambrano’s view, this will ensure that there will be more national coverage.  The idea is that more of the players will be seen in their natural environments.

Zambrano used Brett Levis as an example; the Whitecap who came up through the University of Saskatchewan. He said, while MLS teams do a good job developing players, each can only “absorb” 25 players or so per age group, and that’s simply not enough.

And he said those staff members will be tasked with not only identifying players, but helping them develop. If they need to be referred to the still-yet-to-be-announced Canadian Premier League, that’s what will be done. If there’s a collegiate soccer opportunity, that will be sought out.

As for the youth program, Zambrano said he will bringing 1997s, 98s, 99s and maybe an 00 or two together on January 9 for an Olympic program camp in Florida. They will play two opponents, one of them being Colombian side, Atletico Nacional.

There will be three camps this year for 99s and 00s.

And, moving from the junior players to our senior star, Zambrano revealed that Atiba Hutchinson, who on Wednesday was named this country’s men’s player of the year for the sixth time in his career, may still wear Canada red down the road. Hutchinson is playing a key role for Besiktas as the Turkish side moves onto the knockout stages of the Champions League. Hutchinson will turn 35 in February, but still plays like a 25-year-old.

Zambrano said that earlier this year, Hutchinson told him that he was planning to play his final game for Canada.

“I know that when I spoke to Atiba he was feeling down, he was going through an injury, he wasn’t sure if Besiktas was going to extend his contract. But they did… I talked him out of it. I said ‘don’t make a decision you don’t have to make.’ You can still give Canada some precious moments in soccer. You can help this country achieve some milestones. You can be part of us making it for 2022.

“I know that he wants to come back to Canada, to play for one of the teams in MLS. But the way he’s playing now, I think it serves us better for him to keep playing in Europe, so we can continue to enjoy watching him play there.

And Zambrano said that the new advanced statistic measures only add proof to Hutchinson’s value.

“Amongst the best players in the world, he sneaks into the top 10, the top eight. I think he might be the most underrated sportsman in Canada.”

Zambrano said he looks forward to CONCACAF’s new League of Nations, which will see the region’s countries divided into various divisions, and will mean fewer friendlies and more competitive matches going forward. We will learn more about the competition’s format in January

Zambrano noted that many of the smallest countries in the region really didn’t have many chances to prepare and scout for their “A” matches. With more game action, the teams at the bottom will rise, and will give them a greater opportunity to prep to play the bigger guns in the region.

“It’s all for the best. It’s the right thing to do,” said Zambrano.