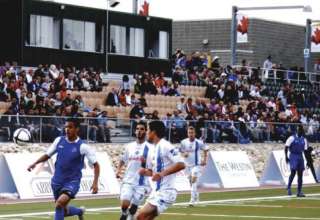 An American soccer expert explains why, despite some pretty noble intentions, that his nation’s leagues and federations aren’t ever going to be decent stewards of the Canadian game…

American soccer fans tend to view Canadian participation in United States-based professional leagues as an entitlement. Canada is, after all, viewed in dismissive provincial terms by many of the fans who make up the American soccer community. Journalists who cover soccer in the United States have not spent enough time truly pondering the impact of Canadian pro teams in U.S. leagues and how that affects both countries. Many fans even viewed MLS’s expansion north of the border into Canada as a logical extension of U.S. Soccer.

Once upon a time, I believed that the two nations who shared a football heritage in this sport via the original NASL needed to forever be linked. But in time I have come to the conclusion that linkage disproportionately favours the United States and is not good for Canada or for the game in that part of the world.

When I was hired as the first employee of the newly rebooted North American Soccer League (NASL), my belief was that Canadian and American professional soccer was inseparable at   the league level. But, during the process of launching the league and maintaining it, I discovered that Canada has its own set of needs from a football perspective that require a domestic league dedicated to growing the Canadian player, promoting the sport in Canada and growing domestic soccer infrastructure and institutions.

While the Canadian and American player development systems and player quality were roughly similar in the days of the original NASL, by the time Major League Soccer added Toronto FC in 2007, the Canadian system was vastly inferior to the American one. Despite the best efforts of Canadian pro clubs, particularly Vancouver and Montreal, player development in Canada was nowhere near the level it had ascended to south of the border.

Had FC Edmonton not opted to join NASL in February 2010, we may have exited the Canadian market entirely since Vancouver and Montreal were both heading to MLS (Though Montreal’s announcement of MLS entry had not taken place yet, we knew we were losing it at some point). Internally, the option of operating a domestic league which was simply a domestic American entity was considered. But FC Edmonton kept NASL north of the border and later, in 2010, the Puerto Rico Islanders defected from USL to NASL, giving the league a second non-USSF club for the 2011 season.

The challenges of running a cross-border league were enormous. At the league we dealt regularly with visa issues, travel issues and player-registration issues. Even last season, the Fort Lauderdale Strikers had to send a rag-tag team to Edmonton, because many of its starters couldn’t cross the border to work. Almost universally, though, a subconscious bias toward American interests existed. Canadian players were considered “foreign” at American clubs and couldn’t move around the league effectively.

League executives spent less time in Edmonton and Ottawa, who eventually joined the league, than other NASL markets.

Travel for FC Edmonton was far worse than any other club and the league wasn’t able to help FCE as much as we would have hoped with offsetting some of those issues.

None of the biases were overt towards Canadian interests or FC Edmonton — they simply were the outgrowth of managing a U.S.-based league with Canadian teams. The irony of this is that some of the most viable growth opportunities for our league were in Canada. This involved potential national sponsorship and national TV deals (the first “national” TV deal for an NASL team came in 2013, when FCE games were broadcast on Sportsnet 360). In my experience as the league’s communications director, media coverage was in most cases easier to obtain in Canada versus the United States for our teams. But still, we were not a Canadian league and never could be one.

After my NASL experience as well as observing other matters around the CONCACAF region, I have come to the conclusion that at some point in the near future, Canada must have its own professional structure. How this would actually come about is for more experienced people to determine.

Canadian sports fans tend to think in “north-south” terms but, in soccer, where development of a competitive domestic product is critical to long-term success, different thinking must happen. Player development is never going to happen consistently at the level it needs to for Canada to be competitive at the international stage.

It is difficult to envision a country with a strong domestic league and strong national philosophy losing players the level of Asmir Begovic, Jonathan de Guzman and Junior Hoilett all in quick succession.

The prevailing view abroad of Canadian soccer is that it is an ugly stepchild to the United States, without independent entities of its own and always doomed to resembled a “B” or “C” team compared to the USA when international competitions take place.

I am met with some surprise or even shock when I tell friends in the United Kingdom that, on average, in major Canadian cities a greater percentage of the public watches the sport than in major American cities. But the perception is that Canada is not able to function on its own in this sport and must rely on the United States for financial support and the infrastructure to maintain the game domestically.

North American sports are organized very much in a self-contained prism. For this reason, cross-border leagues are not as much of a negative in those sports. International football requires an infrastructure with top-down mandates and a place for players to grow. A clear vision and technical direction are needed for any nation to be successful in the international game.

Limited club opportunities and the availability of cheap, experienced American professionals has held the Canadian professional game back, I firmly believe that few can argue this point. But for many operating within the American system is comfortable and, perhaps, economically lucrative.

But, unfortunately, operating within United States Soccer Federation (USSF) sanctioned pro leagues in a culture which promotes American players and the U.S. men’s national team allows Canadian club to take the easy road. Most notable among these clubs is Toronto FC, who has regularly opted to sign established American players and look to Europe to fill out a squad rather than doing the heavy lifting at home.

Being tied to the American system makes it very easy for Canadian clubs to avoid developing as many local players as they can, regardless of the rhetoric executives at the teams employ. Vancouver has made an honest attempt to develop local talent as has FC Edmonton. But, in both cases, I firmly believe they would give that local talent an even greater opportunity to grow if experienced American players weren’t so readily available within leagues that are, after all, based in the United States.

Most countries’ identities as a football- playing nations are linked either to successful domestic league systems or national-team performances. Since Canada does not currently have a true domestic league, or a successful national team, the nation lacks a proper identity in this sport.

Given the rising popularity of the international game in the nation and level of local support professional teams playing in U.S.-based leagues enjoy, the time is now for Canada to begin thinking seriously of making a break from the American system.