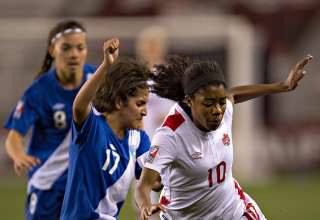 It speaks to the youth movement of the Canadian national women’s team that 20-year-old Ashley Lawrence is seen as a veteran presence.

As Canada prepares for Friday’s Olympic qualifying semifinal against Costa Rica in Houston — with the winner getting a spot in the 2016 Rio Games — Lawrence said it’s great to see teenagers like Deanne Rose and Gabrielle Carle find the net as Canada scored 21 teams and didn’t concede in the group stage.

Herdman has long talked about how the gap between have and have-not nations in women’s football is closing; but that wasn’t apparent in the routs of Guyana, Trinidad & Tobago and Guatemala in the group stage.

But Lawrence, who had a hat trick against Guyana, said that the demolitions were necessary. To prepare for the semis, the team knew that it couldn’t turn it on for half an hour, and cruise through the rest of the matches. And this was a team that wanted to change the perception of itself — that it struggles to create goals outside of FIFA No. 2 all-time goal-scorer Christine Sinclair.

“We had to show the evolution of Canada, that we were a different Canada. No matter who the opponent was, we could never let up. It was a huge opportunity, so we didn’t become complacent. We had to work through different formations, and different partnerships were formed.”

Even though Canada has put many weeks of preparation into the Olympic qualifiers, Lawrence said nothing can be a substitute for game experience. So, for the teens, these games were vital.

“It was bittersweet, in a way. For many of the players, we have worked together at the camps. But they needed to get games under their belts.” And that also allowed Herdman to put the “evolution of Canadian style” into practice.

Now, 21 goals is 21 goals — but, of course, no one is going to say the evolution is progressing until Canada can score multiple goals against higher-tier opposition. Costa Rica offers that opportunity.

Of course, Canada will need to be more responsible defensively — and that will mean clamping down on creative midfielder Raquel Rodriguez. The former Penn State player faced Lawrence in the NCAA — Lawrence is a West Virginia Mountaineer. Lawrence said Costa Rica can be dynamic in getting the ball from midfield to the forwards.

“The key is killing that link,” she said.

Lawrence clashed heads with T&T’s Victoria Swift in the second game of the group stage, a collision that left Lawrence with a nasty goose-egg on the forehead. She still played nearly an hour. She played only a little more than half an hour in the 10-0 pasting of Guatemala.

There’s no worry about her fitness for Friday.

“Initially, it did swell up a lot. But it was one of those things where it looked a lot worse than it actually was.”