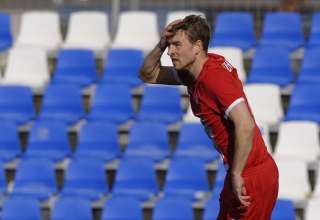 If David Wotherspoon is named to the Canadian roster for the Oct. 16 Nations League qualifier against Dominica, he’ll be making his first-ever trip to the country he’s representing.

Wotherspoon, who plays in the midfield for Scottish side St. Johnstone, was called up to the Canadian side by coach John Herdman in March. He can play for Canada because his mother is from this country.

But, first things first. Before he can think about a chance to play in Toronto, he’s with the Canadian side this week in Florida, as Herdman’s crew prepares to play Sunday’s Nations League opener against the U.S. Virgin Islands.

“We’re taking it one game at a time, and I’m focused on the game ahead of us right now. There’s a lot to take in at the moment.”

By a “lot to take in,” he means that the Canadian side has to get a lot of accomplished in the short window of an international camp. There are young players like striker Jonathan David and defender Derek Cornelius who have to be worked into the system. And, even with the veteran players, they have to be on board with Herdman’s plans. This is a team of positive thinkers, which is a must for Herdman, who has shown with his time in the women’s program that  he believes as strongly in a team’s mental health as he does its physical preparation.

“You don’t get a lot of time together. In that short time you get, you have to get to know players you don’t usually play with. And, as a team, we are trying to create our own identity. And that’s how we act as a team, both on and off the pitch.”

Last week, Herdman referred to the 2022 World Cup as a “when we get there,” not an “if.” Those are big words for a program that’s only made it to one World Cup, and that was more than three decades ago.

“But that’s the confidence that’s being drilled into us right now,” said Wotherspoon. “We’re breathing it.”

He said he’s been in regular contact with Herdman since the Murcia camp.

“Murcia was fantastic for me. What comes across is that he’s really passionate; he really cares about what he’s doing.”

And with the likes of winger Alphonso Davies, who is off to Bayern Munich in the new year, and Jonathan David, who has seven goals this season already for KAA Gent, there is an exciting youth movement afoot. Wotherspoon, who has played hundreds of SPL matches, says Canada is in a period of “unbelievable talent coming through.”

The forecast is calling for 31 C temperatures at game time, with humidity pushing the sticky factor way up high. For a player used to Scottish weather, is it too much? Wotherspoon said the team is handling the heat “quite well” through training,

It likely won’t be as warm for that game in Toronto in October. If Wotherspoon makes it, does he have plans for his time in the city. A ride to the observation deck of the CN Tower? A rip through the Distillery District? Nathan Phillips Square?

“No, just making it to Canada is the goal,” Wotherspoon laughs. “That would be a major achievement.”