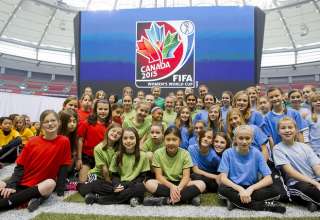 Christine Sinclair walked onto the field at BC Place, cheered on by her national-teammates and minor girls’ soccer players from across Metro Vancouver.

She placed the ball on the point white maple leaf placed on the BC Place turf, then shot the ball into an open goal. Fireworks ensued, and the logo for the 2015 Women’s World Cup was unveiled.

It was the highlight of Friday’s short-and-sweet ceremony which saw the Canadian Soccer Association lift the curtain on the logo. And it gave Sinclair yet another chance to shine in the Canadian spotlight.

Five other composite emblems were launched in the other host cities: Edmonton, Winnipeg, Ottawa, Montreal and Moncton.

“The emblem of a competition is an important step on the road to the first game,” said FIFA President Sepp Blatter in a message that was recorded for the launch event. “It symbolizes and conveys the values of a country. One could say that it represents the beat of the host country’s heart with all its history and emotions. Organising the FIFA Women’s World Cup with 24 teams for the first time in 2015 will give a greater international dimension to this competition. I am also convinced that, with its diversity, the Canadian population will be a great support to all the teams and will add, once again, a special atmosphere to the tournament.”

Canadian Soccer Association President Victor Montagliani said that soccer fans will “Fall in love again with this incredible group of women,” in reference to Sinclair and the women’s national team, who won bronze at the 2012 Olympics.