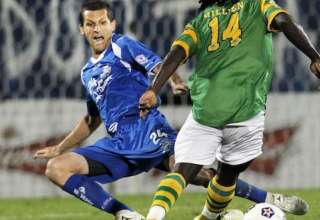 Unless we see the Impact make a signing over the next three weeks, it looks as if the battle to be the third Canadian on the roster could come down to teenager Karl Ouimette, forward Evan James or veteran Eduardo Sebrango.

On Monday, the Impact announced the roster that will head down to Florida for the upcoming Disney Pro Classic tournament, which kicks off next Saturday.

Absent from the roster were three Canadians who were with the club last year in NASL action, including veterans Nevio Pizzolitto and Simon Gatti. The Impact confirmed Monday that neither player will be back on the field for the club, but that both have been offered positions in the organization.

As well, Romanian-born Canadian Mirceal Ilcu’s name wasn’t on the Florida roster. (MONDAY UPDATE: The Impact has confirmed that Ilcu is injured and is with the U21 team)

So, of the five players holding Canadian passports who played with the Impact in its final NASL season that were invited to the team’s inaugural MLS camp, four have now fallen by the wayside. Reda Agourram was cut earlier in the preseason. Now, Sebrango, who is a Canadian citizen but isn’t eligible to play for Canada because he’s appeared in FIFA matches for Cuba, is the only one of the five left.

On the roster, Montreal brings just five Canadians down to Florida; goalkeeper Greg Sutton and midfielder Patrice Bernier, who are signed for the 2012 season, James (chosen in the supplemental draft), Sebrango and Academy teen Ouimette, who comes down on a trial basis.

In the end, if Sebrango is the third Canadian to make the team, Montreal’s roster would bear a striking similarity to that of Vancouver — the bare minimum of Canadians allowed on a Canadian club’s MLS roster (three). And each team would have one of those spots taken up by a player who actually isn’t eligible to play for our national program.

Indeed, it will be interesting to see how the Whitecaps and Impact stack up against each other when they face each other in Florida next weekend. Will the coaches use it as a sneak preview of the March 10 season opener? Will the teams use what the coaches see as their first XI selections. Because, then, it will be fascinating to see how many Canadian players the two Canadian clubs employ during the match. It would be a sad, sad statement on the MLS’ mandate in Canada — part of which is to help the development of Canadian soccer — if Bernier found himself as the only Canadian national on the field.