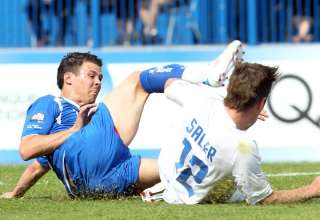 Fullback Niko Saler survived the last year’s purge of the FC Edmonton backline. But, with more defensive prospects coming into the NASL team’s camp, the Canadian left back was let go on Wednesday.

Saler, who was invited to the Canadian U-20 camp last year but didn’t make the final squad, got into a few matches last season as an understudy to left back Alex Surprenant. Eddy Sidra, who was still returning to match fitness, wasn’t ready to play early in the year and so Saler was able to get some time. When Sidra was healthy, he became the No. 1 choice at left back.

But, both Surprenant and Sidra were part of a postseason purge after 2011’s playoff loss to the Fort Lauderdale Strikers which saw FC Edmonton chop 11 players from its roster. But Saler, a Lethbridge, Alta. native, was spared, even though the club’s Director of Soccer Operations, Joe Petrone, had repeatedly stated that improving the left side of defence was the team’s major off-season priority.

With veteran Kevin Hatchi already signed at left back, and with Canadian Fabrice Lassonde in camp — a player who can play on the left side of defence and has Bundesliga 2. experience, there was likely little chance for Saler to make a breakthrough into the starting lineup.

Defender Adam West, who was with the Fort Lauderdale Strikers last season, also has been impressive in camp — after joining the team right before the kickoff of its friendly victory Saturday in Vancouver over the Metro Soccer League All-Stars. The team is in Edmonton this week, as it prepares to play two friendlies this weekend against PDL side WSA Winnipeg in the Manitoba capital. Warm temperatures allowed the team to escape the indoor training facility at the Victoria Soccer Centre and instead train on a full-size pitch in Spruce Grove, west of the city, on Wednesday.

Haitian forward Fabien Vorbe, who played as a defender for FCE in Saturday’s friendly, also remains in camp, even though he is living with just the clothes on his back. His luggage was lost as he arrived in Vancouver and as of Wednesday morning he still hadn’t been reunited with his stuff. Luckily, his cleats were in his carry-on bag.