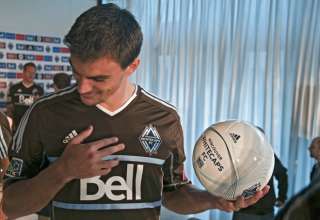 OK, how many soccer clubs can you name that have all-brown kits? St. Pauli? And… and…?

The Vancouver Whitecaps, that is. The Whitecaps unveiled their Adidas brown third kits yesterday with a fashion show at the stadium. And, photographer Matthew VanDeventer was on hand to document the debut of the new kit for The 11.

The club says that the new kit is an homage to the forests of British Columbia. From the press release: “(The) third kit is predominantly arbutus brown, with sky-blue accents, which reflects the unique land full of deep roots and the high-reaching arms of the Douglas fir, western red cedar, mountain hemlock, Pacific dogwood, lodgepole pine and Sitka spruce.”

The team will wear the new nearly all-brown strip this Saturday when it hosts the Colorado Rapids.

Adidas has a stranglehold on major club football in Canada. The brand with three stripes designs jerseys for all teams in the MLS, and also is the provider of FC Edmonton’s merchandise. FC Edmonton unveiled their orange Adidas Drillers retro third jerseys last week.