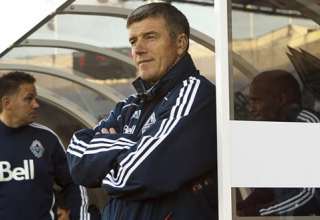 New Vancouver Whitecaps coach Martin Rennie will get the chance to work with a new staff in 2012.

The Whitecaps announced Wednesday that assistant coaches Colin Miller and Denis Hamlett were relieved of their durties “effective immediately.” The team issued a terse statement, devoid of the usual final thank yous we are used to seeing uttered by general managers or presidents in these sort of MLS press releases.

Miller is a former Canadian national-team captain and previously worked with the Whitecaps Residency program.

Hamlett coached the Chicago Fire to good league finishes in 2008 and 2009, but his team struggled in the post-season. Before that, he was an assistant with the Fire from the team’s inception in 1998.

When Hamlett was hired, there was speculation that, with his resume, he would come in and take the reins if then-coach Teitur Thordarson was removed. Thordarson was sacked early in the season, but Hamlett didn’t move up.

But, with Rennie coming in after his Carolina RailHawks were knocked out of the NASL playoffs, the assistants were never safe. They never are when a coaching change is made.